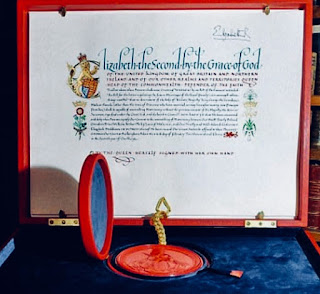 A point of royal protocol... The formal consent document, signed by Queen Elizabeth II for Meghan Markle to marry Prince Harry, was unveiled to the public last Saturday. Unlike the consent document for Prince William and Kate Middleton, it did not refer to Meghan as “our trusty and well-beloved.” According to a spokesperson for Buckingham Palace, Kate Middleton was referred to by this term as she was a British citizen. “Trusty and well-beloved” is customarily used only for citizens of the “UK and Commonwealth Realms.”

Royal weddings are full of protocol but how are guests expected to behave on the big day?

For any ordinary wedding-goer, the prospect of attending a royal wedding and meeting royalty, especially the Queen, is a daunting one. What is the correct form in such a situation?

Don't overdo it. Debrett's “New Guide to Etiquette and Modern Manners” says the sweeping curtsy and long, low bow “can be the subject of some amusement within royal circles.” Instead, ladies are expected to make a brief bob with the weight on the front foot, and gentlemen should opt for a small nod, and look down briefly. Do the same when the royal leaves the room.

Younger members of the royal family will probably have a less formal attitude to introductions, however it is best to refrain from informalities. While it is fine to accept a handshake from the Queen, officials discourage any other form of touching. Former Australian prime minister, Paul Keating, was famously branded the Lizard of Oz in 1992 when he was photographed placing his arm on the Queen's back. However, in 2009, the Queen herself touched US First Lady Michelle Obama on her back during a reception at Buckingham Palace - a gesture which was returned. A palace spokesperson referred to it as “a mutual and spontaneous display of affection and appreciation.”

At state banquets, guests are not allowed to take photos. A spokesperson for Buckingham Palace said that at all royal events the use of personal cameras is discouraged. The event will, in any case, be covered by a professional photographer. – Sources BBC, Debrett’s and Daily Mail 2011 - 2018

Etiquette Enthusiast, Maura J. Graber, is the Site Editor for the Etiquipedia© Etiquette Encyclopedia
Posted by Etiquipedia at 6:18 PM