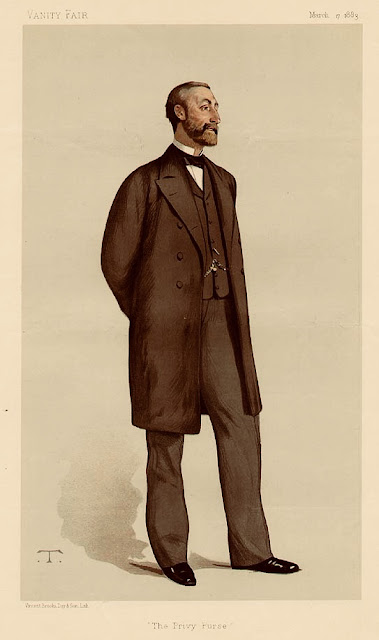 Royal Dinner Parties in England of 1889

The royal dinner parties of England are the most formal and studied in the world. To beginners, they become a frightful ordeal, and they rarely at the end can tell what the meal consisted of; to old stagers they are a frightful bore. The novices are expected to arrive early so as to be posted by Sir Henry Ponsonby in court etiquette. The Queen usually receives her guests for afternoon tea in her own sitting room, and remains a short time with them chatting on light subjects; then they are permitted to wander over the castle or stay in their rooms till dinner time, which is at 9:00. She says a few words to each guest as she enters the dining room, and then leads the way to the table.

It always seems so discourteous for no one to step up and offer the old lady his arm, but it would require an equal in rank to do so, and she enters and leaves the room alone. There is very little conversation at the table. Each guest is asked one question by the Queen and can make one reply. The pauses between are dreadful, and the mechanical parceling out of questions and answers makes it seem as if the Queen were putting a Bible class through its catechism. Each one waits for his turn to come next, and in the embarrassment the “answers” are often of the most stupid kind.—New York Star

Etiquette Enthusiast, Maura J. Graber, is the Site Editor for the Etiquipedia© Etiquette Encyclopedia
Posted by Etiquipedia at 6:36 PM