Etiquette and a Mixed-Race Queen 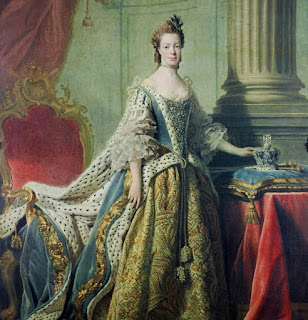 Portrait of Queen Charlotte, the wife of King George III, from the National Galleries of Scotland – King George III and wife Charlotte, England’s mixed-race Queen, had 15 children, 13 of whom survived to adulthood. During her first years as Queen, the former German Princess, Charlotte had some difficulty in adapting to the life of the British royal court. A strained relationship with her mother-in-law, Princess Augusta, didn’t help matters. Augusta made it difficult for Charlotte to establish social contacts by insisting on rigid royal court etiquette. She also initially appointed many of Charlotte's staff, and several were suspected of reporting on Charlotte's behavior, to her mother in-law. When Charlotte turned to her German companions for solace, she was criticized for “keeping favorites.” Regarding Queen Charlotte’s partial African ancestry, a Buckingham Palace spokesperson, David Buck, was quoted by the Boston Globe as saying, “It is a matter of history, and frankly, we've got far more important things to talk about.” Indeed!

The romantic wooing of the King of Spain reminds one how rarely the element of romance has been associated with royal marriages. What could have been more brutally inconsiderate than the arrangements for the marriage of Queen Charlotte, wife of King George III? This Princess, just 17, was selected as consort for the King of England. Her life at Mecklenburg, writes Lady Violet Greville, had hitherto been of the simplest. She dressed “en robe de chambre” every day except Sunday, when she put on her best gown and drove out in a coach and six. The Ambassador sent to demand her hand having arrived, she was told nothing of his mission, merely that she was to dine downstairs that night for the first time. “Mind what you say, ‘et ne faites pas l’enfant’,” was the warning of her eldest brother. After dinner, at which she was naturally very shy, she beheld the saloon illuminated, a table and two cushions prepared for a wedding. Some kind of ceremony then took place; she was embraced by her family, and presented by the Ambassador with a beautiful parure of diamonds, including the little Crown of diamonds which so often appears in her portraits. She was pressed for an immediate departure, but pleaded for the respite of a week, in order to take leave of everybody. During this time she ran about visiting the poor and the little garden of medical herbs, fruit and flowers which she cultivated herself for the benefit of the poor. She afterward introduced the same practice at Kew and Richmond.

The poor little bride suffered a terrible crossing to Harwich, the Royal yacht being nearly driven on the coast of Norway. The Duchesses of Ancaster and Hamilton, sent to conduct the Princess to England, were both much indisposed, but Charlotte herself remained quite well and cheered the company by singing Luther's hymns to her harpischord in her cabin with the door open. Arriving in London at about 3 o'clock, having traveled since 12, she was met by the King in the garden of St. James’ Palace. Attempting to kneel, she was caught by the enthusiastic Monarch, who embraced her kindly and nearly carried her upstairs. That very evening the wedding ceremony took place. Horace Walpole writes of the new Queen: “She looks very sensible, cheerful and is remarkably, genteel” (that favorite epithet of the period). “Her tiara of diamonds was very pretty, her stomacher sumptuous, her violet velvet mantle and ermine so heavy that her clothes were dragged almost down to her waist.” The wedding over and supper not being ready, the Queen sat down and obligingly played and sang to her harpsichord. The royal party never separated till between 3 and 4 in the morning, no slight trial for a bride of 17 who had employed the few moments she passed in her room after her arrival in trying on her wedding gown and the rest of her trousseau. When first she caught sight of the Palace she became very nervous, and, being told that she was to be married that evening, she, in fact, fainted in the carriage. The Duchess of Hamilton, one of the beautiful Miss Gunnings, smiling at her fears, Charlotte said: “You may laugh— you have been married twice — but to me it is no joke.” It is pleasant to think that after being so highly tried, Charlotte's married life proved perfectly happy.

Very different was the arrival of Catherine of Braganza, who, when first seen by Charles II, was laid up with a cough and a little fever in bed. He was not favorably impressed by his new Consort and remarked as much to his attendants. Elizabeth Farnese, who married the King of Spain, son of Louis XIV of France, as his second wife, celebrated her arrival in Spain by quarreling with, and summarily dismissing the lady in waiting sent to receive her, the famous Princess des Ursins, who had ruled the late Queen, and by whom she herself had been chosen successor. Elizabeth's future life was passed in slavish attendance on her husband that she might secure her influence over him and prevent any state affairs being transacted without her knowledge. Twenty minutes only of the day and night was she permitted to be alone. Elizabeth was an ardent sportswoman and followed the King even at the chase; the rest of her existence was passed in a routine of arduous etiquette and monotony.

George IV's reception of his bride, Caroline of Brunswick, is well known— how the blue-eyed, bouncing, buxom girl was implored by Lord Malmesbury to be very particular about her talk and her toilet; how the Prince pretended to be overcome at their first meeting and called for a dram of brandy, and how the Princess afterward declared that he was drunk on her wedding night. Not much chance of happiness there! Until quite recently very, little liberty was accorded to Princesses. Queen Charlotte, even after her marriage, was for several years in thraldom to the dowager Princess of Wales and denied all diversion and pleasures. She told Miss Burney that even her jewels had ceased to dazzle and interest her. “Believe me,” she said, “it is the pleasure of a week, a fortnight, at most, and then returns no more.” One of her greatest griefs, and one which caused her bitter tears, was the determination of her mother-in-law that Charlotte should wear her jewels when she received the sacrament for the first time after she became Queen. She had promised her own mother never to do this— it was an act of humility which had been strictly inculcated on her; and it proceeded from the game devotional impulse which caused King George to take off his Crown when he knelt at the altar during the Coronation.

The courtship of Queen Victoria brings us into a pleasanter atmosphere. On Prince Albert’s first visit to England she liked and appreciated him at once, and his tastes agreed with hers. “Every grace had been showered by nature on this charming boy,” says Baron Stockman of him at this time. The Baron judged him critically, calmly and impartially until he finally became his most attached and devoted friend and adviser. Queen Victoria and her cousin met at first unconscious of the object of their acquaintance, and when the desired impression had been produced, the young Prince, like a second Sir Galahad, was sent away to travel and fit himself by study and careful education for his great position. On his return to England the Queen writes: “Albert's beauty is most striking, and he is most amiable and unaffected — in short, fascinating.”

The young couple were genuinely in love, and the Queen informed Lord Melbourne that the conquest of her heart was complete. So serious, so dignified, so studious and so excellent a young man would infuse an element of poetry and deep feeling into his love making; but by the rules of etiquette the proposal itself had to come from the young Queen, whose maidenly modesty was somewhat embarrassed at the prospect. She summoned him to her boudoir, where he found her alone. After some desultory talk due to her shyness, she suddenly said: “Could you forsake your country for me?” The Prince answered by clasping her in his arms. In such simple fashion did a young Sovereign, woo and win the husband of her choice. – Los Angeles Herald, 1906

Posted by Etiquipedia at 3:05 AM