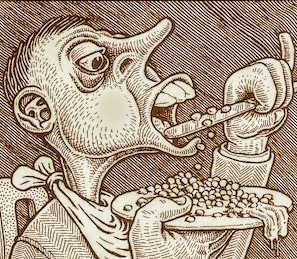 “A man who thrusts his knife into his mouth or sticks a piece of bread on the point of a fork into the platter of roast meat or chicken, may have every virtue in the calendar, yet the fly in the pot of ointment spoils the sweetness of the whole. He offends the accepted canons of good society.”

From the Society and Gossip Section
A Piece from Margaret Sangster

“The word ‘politeness’ carries with it a hidden meaning of elegance find of the ease that is acquired by mingling with one’s fellows,” says Margaret Sangster in “Good Manners for All Occasions,” published in the Christian Herald. “It springs from the Latin polio (smooth), and smoothness is gained not by seclusion, but by the attrition of the city, by the reciprocity that needs must be exercised where people meet one another often, and there must be mutual concessions that there may be peace and agreeable living together.

“A rough diamond is valuable, of course, but its value is greatly increased when the tool of a cunning workman has brought out its beautiful possibilities, shown the immortal fire under the shining surface and made every point a star. A man who thrusts his knife into his mouth or sticks a piece of bread on the point of a fork into the platter of roast meat or chicken, may have every virtue in the calendar, yet the fly in the pot of ointment spoils the sweetness of the whole. He offends the accepted canons of good society.

“A subtle distinction exists between manner and manners. The first is often inherited; it is made up of innumerable little peculiarities that belong to the race and family. In a well known romance the hero is a man well born and of aristocratic traditions, but illiterate and unversed in the ways that had been the natural expression of character in his family for generations. He is a day laborer on the soil that was once his and that has been wrested from him by fraud. Yet though his manners are sometimes flawed by ill temper and discontent, his manner is noble. It is the grand manner of his father.

“Manner shows what spirit we are of. It is the temper of the steel. Manners have to do with our dally conduct. A man or woman who is familiar with etiquette to the least detail, may have an awkward, defiant or self-conscious manner that will be a fearful handicap in business success and detract from the enjoyment one may look for in hours of leisure.” — Los Angeles Herald, 1905

Etiquette Enthusiast, Maura J Graber, is the Site Editor for the Etiquipedia©️ Etiquette Encyclopedia
Posted by Etiquipedia at 2:06 AM