A Royal Nursery in Spain 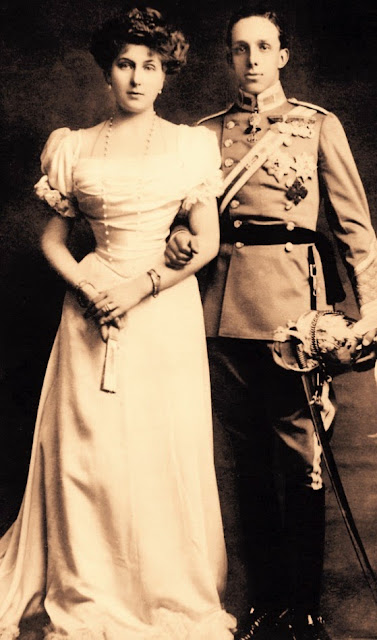 An engagement card featured Alfonso in uniform with his helmet and sword and his then fiancé, Victoria Eugenie. The Spanish Royal Court was considered the most confining in the world concerning etiquette, far surpassing the French Royal Court’s strict etiquette at Versailles. Evidently, the Royal nursery was the only area not controlled by a detailed list of rules of Royal decorum.  — “People who know Spain from books will tell you with bated breath of the cast-iron etiquette that surrounds the royal personage of Spain, of dreadful dinners eaten in solemn silence, of bows to the left and curtsies to the right, of mace-bearers and cup-bearers and sword-bearers, of orders of precedence...”

The little heir to the Spanish throne has begun his babyhood in a suite of rooms arranged entirely after the fancy of his royal mother. Spanish etiquette requires her to conform to ideas other than her own on most points, but in the fitting of the nursery her word is law. The furnishing, decorating and entire arrangement are English, and offer everything that could possibly conduce to a baby’s health and happiness. The suite, directly over the Queen’s apartments, on the sunny side of the palace, consists of living room, dining room, bedrooms for the baby and head nurse, bath and sewing room. The living room is decorated in green and white, with showers of pink rosettes.

The vaulted celling is enamelled in white, and round the walls runs a frieze of animals in Noah’s Ark-like procession. Eight green shades temper the sunshine. The angles of furniture walls are all softly rounded; so the approved method of standing a naughty child in the corner face to the wall could hardly be adopted in this case. With the exception of the rose colored English carpets, everything in the suite is washable. The wide window sills are coziily cushioned; an iron lattice, light and lacelike, but very strong, secures the windows from without. In the bedroom, three large paintings represent “Morning.” “Noon” and “Night.” The first is a sunshiny picture of a baby awakening in his little bed. "Noon” shows him busy with porringer and spoon: and in “Night” he has folded his chubby hands in prayer before going to sleep. The woodwork is white enamelled, and round the celling a frieze of dancing children charms the eye, as do the exquisite tint and design of the blue and white tiling of the fireplace.

The little Prince sleeps in the cradle that rocked father and grandfather before him. It is a stately affair, resting on four Corinthian supports. It was formerly curtained in the richest lace, flowing from beneath a Spanish crown, but the young Queen mother had the crown removed, lest it fall and injure the royal sleeper below; and the lace curtains were, suppressed to allow freer access of air. The cradle linen shows embroidery of fairy like fineness, the other coverlets being sewn with butterflies and roses in white silk. The dining room furniture is white mahogany, with the royal arms of Spain skillfully inlaid in each piece. Throughout simplicity and good taste distinguish this ideal dwelling for a young child. The rooms are considered the best ventilated in all Madrid, for the young Queen inherits her love of fresh air from her illustrious grandmother, the late Queen Victoria of England.—Youth’s Companion, 1907

Etiquette Enthusiast, Maura J Graber, is the Site Editor for the Etiquipedia©️ Etiquette Encyclopedia
Posted by Etiquipedia at 9:22 PM