Etiquette and People of the 5 Meals 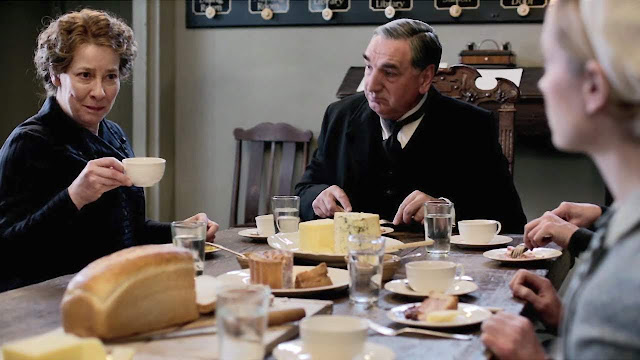 Downton Abbey’s Mrs. Hughes, Mr. Carson and Anna Bates enjoying a Middle Age “beever” or “noonshine?”
——————————————————-
What 5 British meals was Signor Bergeret referring to?  —The terminology around eating in the UK is confusing. For some, “lunch” is “dinner” and vice versa. From the Roman times to the Middle Ages everyone ate in the middle of the day, but it was called dinner and was the main meal of the day. Lunch as we know it didn’t exist - not even the word. During the Middle Ages daylight shaped mealtimes, says food historian Ivan Day. With no electricity, people got up earlier to make use of daylight. Workers had often toiled in the fields from daybreak, so by midday they were hungry. “People got up much earlier and went to bed much earlier.” By midday workers had often worked for up to 6 hours. They would take a quick break and eat what was known as a “beever” or “noonshine,” usually bread and cheese. As artificial light developed, dinner started to shift later in the day for the wealthier, as a result a light meal during the day was needed. The origins of the word “lunch” are mysterious and complicated, says Day. “Lunch was a very rare word up until the 19th C.,” he says. One theory is that it's derived from the word “nuncheon,” an old Anglo-Saxon word which meant a quick snack between meals that you can hold in your hands. Others theorise that it comes from the word “nuch” which was used around in the 16th and 17th C. and means a big piece of bread. — from an article by Denise Winterman, BBC News Magazine


Signor Bergeret, the special traveling correspondent of the “Mattino,” Naples, has been much impressed with the wonderfully adaptive qualities of the British, who bend all things to their will. Writing from Colombo he says: “Only the English, the race of stone and iron, are able, in the midst of this high-pressure work of nature, to continue their physical and mental activity, and the over-feeding which has procured for them the name of  ‘people of the five meals.’ They demand that in the colonies, every Briton shall be ‘twice British.’

“They have transported to the torrid zone their fatiguing games, their rigid etiquette, the abuse of meat, and the use of whisky, and have got the better of the climate as of the land; of the hostility of commercial and official intrigues, as of the violence of nature. No human race has ever been so admirably tempered for colonial domination. Their nature, education and moral principles combine to render the British masters of men and things on the seas and in distant countries. “Seeing their work, one becomes reconciled to the English. These gentlemen of the porcelain shirt fronts, the impeccable cravats, are marvelously tenacious workers, but their incessant fatigue does not make them into so many machines as it does the Germans.” — 1904


Etiquette Enthusiast, Maura J Graber, is the Site Editor for the Etiquipedia© Etiquette Encyclopedia
Posted by Etiquipedia at 12:17 AM