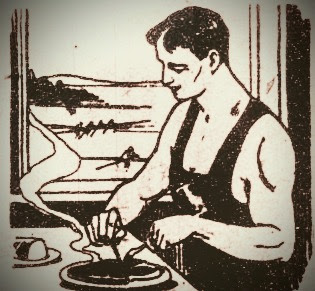 It was Bernheim in 1904 who, according to the story, so far violated all precedents of summer etiquette, as to dine at the club one evening last summer, in his shirt sleeves. While the attire above may still not be allowed in the club dining room, over one hundred years later, most clubs have relaxed their dress codes a bit and many allow men to dine Informally in their shirt sleeves.

It is a question of summer etiquette, but it is mighty disturbing to the Century Country Club of White Plains, N. J., even though there are snow drifts on the golf links in the winter wind whipping shrilly up and down the Landers Road. And the question is:

“Ought a perfect gentleman in the presence of ladies, one being his wife, dine at his club on a hot summer’s night in his shirt sleeves? And if he oughtn’t and does, should the house committee, if they also are perfect gentlemen, take the erring member to task in a typewritten letter, dictated to a stenographer?”


Like every great question, this will never be settled until it is settled right.

The first part of the question has been raised by the house committee, of which Albert M. Wittenberg, wholesale coal dealer, is chairman, which includes Harry H. Meyer, president of the club and member of the stock exchange house of Sellgman & Meyer; Benjamin Stern of Stern Bros.’ dry goods firm, and Harry Rindskoff.

The tail end of the question has been raised by Henry C. Bernheim. It was Bernheim who, according to the story, so far violated all precedents of summer etiquette, as to dine at the club one evening last summer, in his shirt sleeves.

How It All Happened

According to Bernheim’s friends, he and his wife visited the club one afternoon last August. Bernheim played several sets of tennis. When the play was over he and his wife decided to dine at the club, and he ordered the dinner served on the veranda. When it was announced that dinner was ready it appeared to Mr. and Mrs. Bernheim that they were the only members in or about the house. After they sat down Bernheim felt the heat was oppressive and, always mindful of the courtesy due from a husband to his wife, he asked Mrs. Bernheim if she would mind if he dined without his coat. Mrs. Bernheim, having wifely sympathy for her husband, and having, moreover, some real knowledge of how well her husband, who is still one of the younger alumni of Columbia, looked in tennis flannels minus a coat, said she didn't mind in the least.

Therefore Mr. and Mrs. Bernheim had a delightfully comfortable and quiet dinner, supposing they were the only persons except the servants in the building. It happened, however, so Bernheim’s friends assert, that there was a finical male person in the house who is so great a stickler for form that he wouldn't shock himself by appearing even before his wife without a coat. He saw the Bernheims dining and promptly reported to the house committee that the Bemheims were in utter ignorance of the first principles of propriety.

The house committee, or some of its members, particularly Harry H. Meyer, the club's president, were properly shocked and resolved that strong measures should be taken at once. The shirt sleeve habit must be nipped in the bud: It is asserted that the shock sustained by Mr. Meyer was so powerful as to pass clean through him and penetrate the feelings of some of the rest of the committee.

Bernheim Gets a Letter

This would appear to be true, for not long afterward Bernheim received a note typewritten on the club paper, which read in substance as follows:

“Dear Sir— The house committee has been informed that you recently dined at the club in the presence of ladies in your shirt sleeves. This is to inform you that such conduct will not be tolerated.”

The letter was signed with the name of Albert W. Wittenberg, club secretary. Underneath the name was “Per G.” “G,” it is said, was the initial ot the stenographer.

When Bernheim got the letter, he became a good deal hotter than he was on the night of the dinner. He lost no time in replying that he felt quite willing to admit it was hardly good form to sit down at dinner in one’s shirt sleeves, but he regarded the language of the letter as highly impertinent.

To this the house committee, or somebody representing it, replied to Bernheim that it was impertinent to call the committee’s language impertinent, and asked him to withdraw his impertinent impertinence. Up to a late hour tonight, Bernheim hadn't withdrawn anything. — Los Angeles Herald, 1905

Etiquette Enthusiast, Maura J Graber, is the Site Editor for the Etiquipedia©️ Etiquette Encyclopedia
Posted by Etiquipedia at 1:03 AM