The Etiquette of Smiles

Language is the medium of communication between people, it allows you to convey your thoughts to another person. So what is better communication than a smile? Smiling is good manners and good for your business, as this is one of the easiest ways to immediately connect with others. It conveys a feeling of warmth and goodwill to another instantly. Smiling doesn't need a language. Yet, many people still underestimate the impact of first impressions which can either unite or alienate people forever, and smiles are something that can easily be misinterpreted by people from different cultures. Here is a little collection of what does smile mean in some countries around the world...

In China for instance a smile can mean the person is embarrassed, trying to be helpful, curious, happy or friendly. In the middle of an argument, smiling means that the speaker doesn't want this to become personal. When all else fails, just smile in China. The contrary applies for India, where smiling is linked to falsity.

Even in the Japanese culture, non-verbal expressions use the eyes more than the mouth, which makes it easier for the Japanese to determine if a smile is genuine or fake, smiling is still a way to show respect or to hide what you’re actually feeling. This is also the reason why Japanese emoticons used in texting and chatting on the Internet are often mostly expressed with the eyes than the mouth. - ^_^ - Japanese emoticon to express happiness, main focus on the eyes.

Thailand is often referred to as “The Land of Smiles.” because a smile is much more than just a smile: it is a form of subtle interpersonal-messaging. A smile is appropriate in a variety of different situations including when one is happy, embarrassed, or even fearful, and there are at least 12 different smiles that a Thai person may use, each one having a very specific meaning:
The “I’m so happy I’m crying” smile.
The “polite” smile for someone you barely know.
The “I admire you or I’m proud of you” smile.
The teasing, or “I told you so” smile.
The “I am the winner” smile
The stiff smile, also known as the “I should laugh at the joke even though it’s not funny” smile.
The smile which masks something wicked
The sad smile.
The dry smile, also known as the “I know I owe you the money, but I don’t have it” smile.
The “I disagree with you” smile.
The “smiling in the face of an impossible struggle” smile.
The “I’m trying to smile, but can’t” smile.
It's almost impossible for a non-Thai person to read the Thai smiles, but once you have more of an understanding of the meanings behind the smiles, you will be able to read social situations easier and have a better understanding of Thai culture.

In Cambodia, the smile also plays a very important role in communication. It can mean hello, a simple acknowledgement, but smiles are also used to hide worries, embarrassment or anger. The smile is connected to Buddhist religion, where an inner smile represents harmony and spirituality.

In Korea, smile is not just an expression of joy and humor, but smiling can also indicate that one is feeling ashamed or embarrassed. For example: a Korean may smile when they make a mistake.

Switzerland, as a culture with some of the happiest people in the world, Swiss people do not smile that much. However, smiling in Switzerland is a way to express respect during a conversation more so than it is to outwardly express one’s internal emotions. The same applies to the Scandinavian nations, where the level of happiness reportedly high, still people don’t tend to smile a lot. The Norwegian government even humorously explains that when a stranger on the street smiles at Norwegians, they may assume that the stranger is insane.

Germans are very conservative when it comes to outwardly showing expressions of happiness, especially via smiling. Russian people don’t smile, because it implies that you are at best foolish or at worst, sneaky and manipulative. In Hungary, people don’t smile a lot, or at least in the capital, people are less likely to smile at strangers or smile at all. Hungarian people are not rude, but rather pessimistic. The same true in Poland and Slovenia. People are warm and friendly, but they just don’t smile. The contrary true for Lithuania, where you should always greet others with a smile.

Smiling is a cross-cultural language that means a lot to people living in the African continent, as this is the only language understood by all Africans. A smile means acceptance, love, agreement and its meaning usually depends on the circumstances and occasion, in most cases Africans share freely and enjoy smiles with everyone including strangers. Smiles are also used to solve issues among themselves, and this is an important tool for chiefs and clan heads. They use their smiles to resolve disputes. After solving the problem with talks, chiefs and traditional authorities normally ask the disputing parties to shake hands and smile to each other.

Smiling in North-America is a sign of happiness and confidence, and the American smile is not as fake as it seems. North Americans value high-energy, happy feelings more than some other countries, so many people are genuinely happy, with a positive mindset, who usually give strangers the benefit of the doubt. There are plenty of cynical Americans, but when it comes to one-on-one interactions, they often assume that the other person is a good person, so that makes them sincerely smile. However in Argentina for instance smiling is associated with dishonesty.The opposite true in Brazil, where people smile every time, all the time, even while they apology, they smile. Brazilians treat smile as their calling card, although historically, if a Brazilian had a nice smile, it indicated that the person comes from a wealthy family. 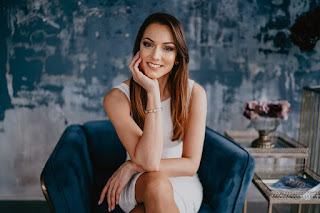 Gabriella Kanyok is a diplomatic protocol, etiquette and communication expert with more than 10 years' experience in working with EU institutes, NGOs, internaionalorganisations, and supporting professionals. She not only advises and trains government- and EU officials, and businessmen in the field of diplomatic protocol and business etiquette, but she leads the communication department of an international organisation. Gabriella holds a Master’s degree in International Studies, and a Master’s in Protocol, Diplomacy and Cross Cultural Relations. She speaks Hungarian, English and French, and is currently learning Mandarin Chinese.