Etiquette and Gilding the Lily 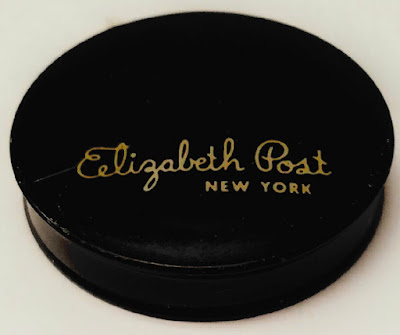 For centuries, books of manners and proper etiquette, had advised young women especially against wearing cosmetics. Lipsticks and powders, etc... were supposed to do no more than enhance one’s “natural charms” and not “gild the lily.” A young woman was seen to be reckless if she were to appear during the day and out in public, in a “made-up” manner. But, by the end of WWI, as more women were smoking and drinking in public, among other things, American women felt much more comfortable in cosmetics, and it wasn’t long before even a few etiquette authorities were promoting its use. Soon, women around the world were taking their cues from their American sisters.   – Along with being the first successor to Emily Post’s etiquette media business, Elizabeth Post, Emily’s only grand-daughter in-law, had a line of “Correct Cosmetics” that were marketed to American women.

Listen to this girls! A newspaper writer on beauty methods quotes a “famous Frenchman who is a leading light in the cosmetic field” as follows: “To me the most alluring thing about the American girl and woman is that she acts as though she were beautiful, whether she is or not. In France, only the most attractive women have the courage to carry themselves off in the charming manner that is part of almost every American girl and woman.” There is more to this, it appears, than a mere boost for American use of cosmetics. Also, there is more than is meant by the saying, “Beauty is as beauty does.” 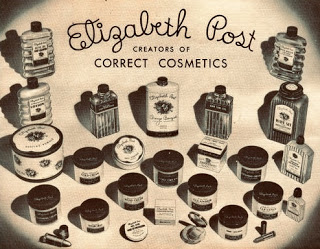 American women, with or without classic features and perfect natural coloring, do not hesitate to groom themselves smartly and develop ease of manners and charm. The result is that America has acquired international fame as a land of beautiful women. As a woman thinketh, apparently so is she. Courage, good health, independence, cleanliness and—ahem!—wise use of cosmetics, have worked marvels. Only a grouch will raise the question. “What is beauty?” – Lompoc Review, 1930

Etiquette Enthusiast, Maura J. Graber, is the Site Editor for the Etiquipedia© Etiquette Encyclopedia
Posted by Etiquipedia at 11:43 PM