Tea and Dining in Early America 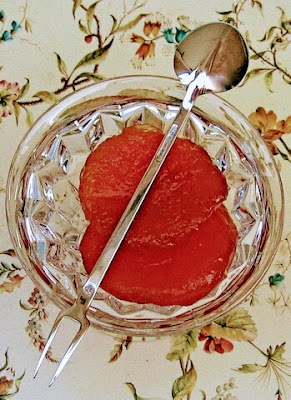 This Steiff sterling, Williamsburg Virginia, reproduction of a “sucket” fork and spoon which features a “rat tail” on top of the back of the spoon’s bowl. Early American Silver had a style all its own. A “rat tail” was a design component which reinforced the bowl of the spoon to the handle.– “Teaspoons were not of a standard size. Often, they were small and of a proportion which allowed them to be laid across the tops of the small handleless cup, as an indication that no more tea was desired. That used to be the etiquette.”

The “Nancy Page” club was almost ready to close its season. They still had some of the fittings of the early American home to study. Today they were interested in silver. First they noted the exquisite texture of the old silver. This came from the fact that it was worked entirely by hand. The hand process kept in a certain life of the silver which heavy rollers of modern usage take out. The spoons made before 1730 or thereabouts had the characteristic “rat tail” a short distance down the back of the bowl, but this extended down further in later years, say 1750.

The crest or initials were usually engraved on the back of the handle. The bowl of the spoon became less elliptical in the later years. Teaspoons were not of a standard size. Often, they were small and of a proportion which allowed them to be laid across the tops of the small handleless cup, as an indication that no more tea was desired. That used to be the etiquette. 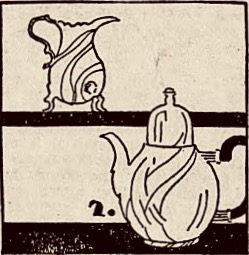 Cream pitchers changed their shapes according to the contours of the other furnishings of the home. Just as the present angular age with its flat surfaces and planes has brought in new silver as well as furniture, so that age with its swelling bulbous contour in decoration, affected the silver. Sometimes the cream pitchers were danity, three-legged affairs like the one shown. This dates back to about 1790. Earlier in point of time when contours were more substantial, we get a tea pot similar to the one shown. These dated back about 1700. It has the domed top of the period and used an ebony handle to make it easier for a hostess to handle the pot filled with hot tea. – Florence LaGanke as “Nancy Page” for the San Pedro Pilot, 1929


Etiquette Enthusiast, Maura J Graber, is the Site Editor for the Etiquipedia© Etiquette Encyclopedia
Posted by Etiquipedia at 11:54 PM