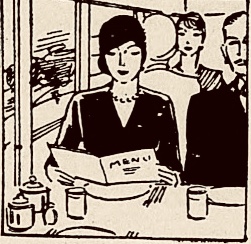 
Nancy and Peter were returning from their short stay in Florida. On the train Nancy watched folks and decided that many of them were good travelers but that a few needed some lessons in train and travel etiquette. For instance, there was the woman who came into the dining car without a hat. It is true that the train was her home for the time being, but it was a home in the sense that a hotel is a home—just temporarily, and as such it becomes a place in which a person maintains certain formalities. Then there was the woman who traveled with much jewelry and wore it all. The train is no place to shine like the morning star, nor is it the place where one’s dressiest clothes are worn. No longer do women feel correctly dressed for traveling only when they are in blue serge, but the well bred woman is still inconscpicuous in her clothes when she travels. 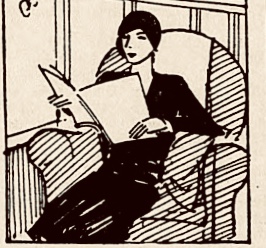 Another little habit of many travellers which annoyed Nancy was the conversational one. Invariably her seat was close beside two people who felt compelled to tell each other the life history of themselves, their families even unto the uttermost relationship. Confidences which should never be given to one’s dearest friend seem to fall from the lips of some travellers into the ears of veriest strangers. Nancy and Peter were courteous in their greetings to folks on the train, they gave a friendly greeting, passed the time of day and then stopped. Books, magazines, papers were always close at hand and were used to stop many attempts at wearisome and long drawn out conversations. – “Nancy Page” for the San Pedro Pilot, 1929

Etiquette Enthusiast, Maura J Graber, is the Site Editor for the Etiquipedia© Etiquette Encyclopedia
Posted by Etiquipedia at 2:39 AM