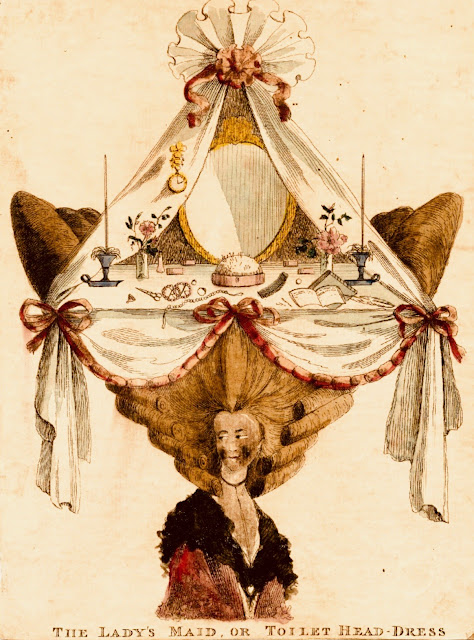 Trends in fashion etiquette, which ruled at the court of Versailles and influenced fashion beyond France, were so over-the-top outrageous, that this parody of an elaborate “hairstyle” is not too far off from some of the actual style fads of the day. Titled “The Lady’s Maid, or Toilet Headdress,” this features an anonymous woman with her hair in an overly exaggerated inverted pyramid, which fills the greater part of the hair design and is supporting a dressing-table, draped with muslin festoons and holding a large oval mirror, a pair of candlesticks, vases of flowers, a watch, a pin-cushion, toiletries, a pair of buckles, rings, a necklace, two books, a pen, small scissors and more. circa 1776
— Source British Museum .org

The language of the fashion plate and the woman’s paper is sufficiently appalling to the mere man even in these days of emancipated and, we may presume, more grammatical womanhood; but, according to an extract from a fashion journal of 1787, the jargon of those days was even more astounding.

This is how the paper described the dress of a certain Mlle. D. at the opera: “She appeared in a dress of ‘stifled sighs,’ ornamented with ‘superfluous regrets,’ the bodice cut in a ‘perfect candor’ point and trimmed with ‘indiscreet complaints.’ Her hair was dressed in ‘sustained sentiments,’ with a headdress of ‘sustained conquest,’ ornamented with several ‘flyaways’ and ‘downcast eye’ ribbons, and her collar was ‘beggar on horseback’ color.”

No doubt all these marvelous terms conveyed some meaning to the fashionable woman of the days when French society danced on the edge of the volcano of 1789, but to their descendants of today, they have absolutely no meaning. — San Bernardino Sun, 1908

Etiquette Enthusiast, Maura J. Graber, is the Site Editor for the Etiquipedia© Etiquette Encyclopedia
Posted by Etiquipedia at 1:05 AM