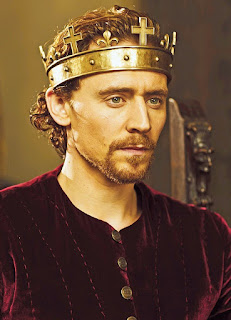 Tom Hiddleston portraying Henry V in the 2012 British television film based on the play of the same name by William Shakespeare. It was the fourth film in the series of television films called “The Hollow Crown.”

Remarkable incidents in this most important occasion of a British ruler’s life. Striking features of ceremony from the earliest day to the last great Coronation event of the 19th Century
👑👑👑👑👑👑👑👑👑👑👑👑
The Coronation of England’s Henry V

In the age of the Plantagenets, Tudors and under the Stuarts, until the Coronation of James II, it was customary for Kings to reside in the Tower of London for some time, previous to the Coronation. On the Saturday before the Coronation, the Sovereign went from Westminster to the Tower of London, attended by great numbers of the Nobility and civic dignitaries, and by those people who were to be Knighted, and who watched their arms that night. Each squire had a chamber allotted him, and a bath in which he bathed. The ensuing day after mass, the Sovereign created them Knights. After their investiture they were permitted to sit down in the King's presence, but during the whole time of dinner, they were rot allowed to partake of any part, of the entertainment. The Queens in their own right, Mary and Elizabeth, though they girded the swords on the Knights with their own-hands, did not give the accolade or blow, which is the determinate action that impresses the character of Knighthood. At both Coronations, Henry, Earl of Arundel, performed this office. A copy of his appointment is to be found in Rymer.

Henry V was Crowned on the 9th of April, 1413. Katherine of France, the Queen of Henry V, was Crowned on the 24th of February, 1420. The account which Holinshed gives of the magnificence displayed upon this occasion is far too characteristic of the age to be omitted: “After the great solemnization of the foresaid Coronation in the church of St. Peter’s, at Westminster, was ended, the Queene was conveied into the great Hall of Westminster, and there set to dinner. Upon whose right hand sat, at the end of the table, the Archbishop of Canterbury and Henrie surnamed the Rich, Cardinall of Winchester.

Upon the left hand of the Queene sat the King of Scots in his estate who was served with covered masse, as were the foresaid Bishops, but yet after them. Upon the left hand, next to the cupboard, sat the maoir and his brethren, the aldermen of London. The Bishops began the table, against the Barons of the Cinque Ports; and the Ladies against the maior. These, with, others, ordered the service, and, for the first course, brawne in mustard, eels in burneur, pike in herbage, fuiment with balien, lamprie powdered, trout, codling, plaice fried, martine fried trout, codling, plaice fried crabs, leech lumbard flourished tartes and a device called a pelican, sitting on hir nest, with hir birds and an image of St. Katherine holding a booke and disputing with doctors.

Etiquette Enthusiast, Maura J. Graber, is the Site Editor for the Etiquipedia© Etiquette Encyclopedia
Posted by Etiquipedia at 12:51 AM