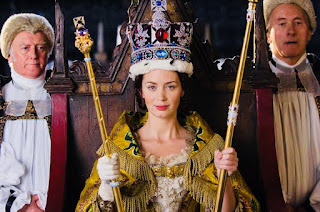 Even though an entire era of purported graceful living and good manners was named after Victoria, her manners needed quite a bit of work – According to Kate Hubbard, in her book, “Serving Victoria: Life in the Royal Household” Victoria, “loved her food. She was greedy and she gobbled. She liked her dinners to last no more than half an hour. Guests would quite often find their plates whisked away while they were still eating because once she had finished, all the plates were removed. She was a hearty eater and she was a fast eater.” And as for courtly conversation" at the table? She did not like politics to be brought up, and, oddly, “She didn't like marriage being discussed in front of her youngest daughter, Beatrice, before Beatrice married. Anyone who mentioned marriage at dinner was swiftly reprimanded.”

Remarkable incidents in this most important occasion of a British ruler’s life. Striking features of ceremony from the earliest day to the last great Coronation event of the 19th Century
👑👑👑👑👑👑👑👑👑👑👑👑
The Coronation of England’s Victoria

At seventeen minutes past three on the morning of June 28, 1838, a Royal salute of twenty-one guns announced that the sun was then rising upon the Coronation day of Victoria. By 4 o'clock the streets were so thronged with carriages and pedestrians, that they were in many places impassable and the whole population seemed to have poured out in the direction of the parks and of Westminster Abbey. It was not until half-past ten that her Majesty's carriage passed Apsley House. It moved on amid the loud acclamations of her subjects. The state coach was drawn by eight cream-colored horses and attended by a yeoman of the guard at each wheel and two footmen at each floor.

Endless grooms and guards attended the long procession. It was as splendid as befitted the rejoicing of the people over a Coronation, that made them happier than any since the time of Alfred. The London Sun of the 28th reported that: The Queen, attended, passed to the altar. Her Majesty, kneeling upon the cushion, made her first offering of a pail of altar-cloth of gold, which was delivered by an Officer of the Wardrobe to the Lord Chamberlain, by his Lordship to the Lord Great Chamberlain, and by him to the Queen, who delivered it to the Archbishop of Canterbury, by whom it was placed on the altar.

After elaborate services followed the sermon by the Bishop of London, then came the oath and the anointing. Then there were further ceremonies of the spurs, the sword, the mantle, the orb, ring and scepters, and at last came the Dean of Westminster bearing the Crown. Tho Archbishop took and placed it on her Majesty's head, when the people, with loud and repeated, shouts, cried: “God save the Queen.” There was a doffing of caps, a sound of trumpets, a beating of drums, a firing of guns. The old report says: “Never did we hear louder or more hearty plaudits, that almost rent the walls of the old abbey, setting at naught all etiquette and ceremony, than those which burst from the lips and hearts of her attached and loyal people, when the Crown was placed on the head of their young and lovely Sovereign.” –San Francisco Call, 1901

Etiquette Enthusiast, Maura J. Graber, is the Site Editor for the Etiquipedia© Etiquette Encyclopedia
Posted by Etiquipedia at 1:05 AM