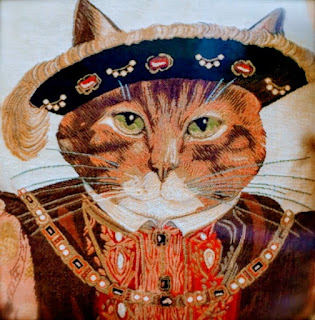 Henry VIII acted like an animal at times, but not while dining. Yes, even many “etiquette experts” get it wrong. One was quoted as saying this, upon the release of his 2013 book of etiquette: “In Henry VIII’s time it was good manners to chuck lamb bones over one’s shoulder for the greyhounds to feed. That would cause raised eyebrows these days.” Au contraire, mon frère! When it comes to table manners, we have no grounds to feel superior to Henry VIII. He observed complex etiquette. True, there was at least one occasion when Henry threw sugar-plums at his guests, and, given the gallons of sweetened wine consumed, meals must sometimes have got out of hand. Yet the general rules of table were politer than our own. If Henry overindulged (and surely he did, his waist thickening to 54in after a jousting accident in 1536), he did so with aplomb. Hands were washed before, during and after every meal. He had a special fingerbowl – heated in a chafing dish – and a designated napkin to protect his fine ‘manchet’ bread roll. When he had eaten enough, he stood and washed his hands while an usher brushed crumbs from his royal person.

Remarkable incidents in this most important occasion of a British ruler’s life. Striking features of ceremony from the earliest day to the last great Coronation event of the 19th Century
👑👑👑👑👑👑👑👑👑👑👑👑
The Coronation of England’s Henry VIII

Henry VIII was extremely fond of pageantry and he was particularly anxious about the ceremonials of his Coronation. The Londoners seconded his desires, and when, after having created twenty-four Knights of the Bath, he rode through London from the Tower, June 22. 1509, the streets were hung with tapestry and cloth of arras, and a great part of the south side of Cheap and part of Cornhill were hung with cloth of gold. The several companies and civic dignitaries lined the streets, and Hall tells us:

“The goldsmiths’ stalls unto the end of the Old Change, being replenished with virgins in white, with branches of white wax; the priestes and clearkes in rich copes, with crosses end censers of silver, censing his grace and the Queene also as they passed. The Queene Katherine was sitting in hir litter, borne by two white palfries, the litter covered and richlie apparelled, and the palfries trapped in white cloth of gold: her person aparelled in white satin imbroidered, hir hair hanging downe to hir backe, beautlfull and goodlie to behold, and on hir head a coronall set with manie rich orient stones.” The Coronation was celebrated with brilliant “justs and turneies” which the King and Queen witnessed from “a faire house covered with tapestrie.”
– San Francisco Call, 1901


Etiquette Enthusiast, Maura J. Graber, is the Site Editor for the Etiquipedia© Etiquette Encyclopedia
Posted by Etiquipedia at 2:22 AM