Greeting No Longer Consists of “Feigned Blow at Nose of Friend” 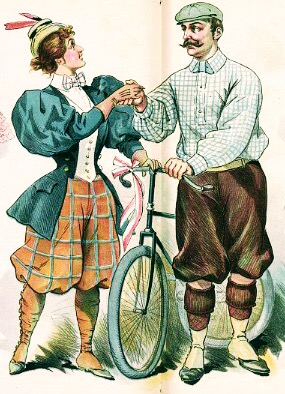 A higher handshake than the norm, as illustrated in Puck
– Photo source, Library of Congress


Etiquette has been defined as “the oil that makes the wheels of society run smoothly,” and no one will deny that a reasonably fixed code of social observance is useful and even necessary. But how deliciously funny some of our customs are! One of the most absurd of these, the “high handshake,” is to be chronicled, thankfully, as rapidly becoming obsolete. It has for several years been the absurdest burlesque of friendly greeting.

The custom of shaking hands in token of cordial feeling had its origin in the ancient habit of kissing the hand of one’s superiors in rank in token of fealty or respect. Gradually, the handclasp of equals was evolved from the ceremony and has continued in favor. Our grandfathers’ graceful habit of kissing the hands of the women they wished to honor, passed into disuse with their other courtly manners when their picturesque costume of silk hose, buckled shoes, velvet and lace ruffles, was abandoned for the severities of their modern garb.

There is an “eternal fitness” even in small matters, and the simple handshake seemed more in consonance with the simple dress of this century. The “high handshake” in which the hands are extended to a level with one’s nose and there grasped with a single movement as if to avert a blow, can claim affinity only with the clown’s “motley.” A glad farewell! – Los Angeles Herald, 1897


Etiquette Enthusiast, Maura J Graber, is the Site Editor for the Etiquipedia© Etiquette Encyclopedia
Posted by Etiquipedia at 10:12 PM