Etiquette and Mutual Regard at Table 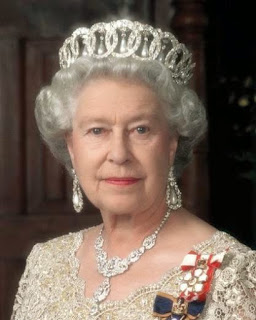 A desire for fresh smelling breath? Food allergies? Or “pickiness?”– “There are certain foods Queen Elizabeth has restricted palace chefs from using and advised other royals against eating. Garlic is apparently the ingredient she dislikes most.
It’s been long rumored that the Queen hates garlic and banned palace chefs from cooking with it, and the Queen’s daughter-in-law, Camilla Parker Bowles, Duchess of Cornwall, confirmed the royal family is indeed not supposed to eat garlic...
Another cooking ingredient largely off the royal table is onions. It is unclear if chefs are advised to keep them away from the Queen (and the rest of the royal family) due to because of smell or taste, but cooks are permitted to use onions sparingly. Darren McGrady, a former royal chef who worked at Buckingham Palace for more than 15 years, told Recipes Plus that cooks ‘can never serve anything with garlic or too many onions.’ ‘The Queen would never have garlic on the menu,’ he added. Certain ingredients used to cook up dishes aren’t the only things reportedly off limits. Members of the royal family aren’t supposed to eat shellfish of any kind—due to the higher risk of food poisoning—or meat that's cooked rare, according to a 2000 BBC report. Long pasta and tomato sauces shouldn’t grace the royal dinner table unless it’s for a very specific special occasion.” – Newsweek, 2018

NEW YORK – Few situations are more discouraging for a host or hostess than to prepare a wonderful meal, only to find there is a guest who cannot or will not eat one or several of the dishes prepared. Few situations are more embarrassing or uncomfortable for a guest than to have to struggle with food he or she detests, or to refuse it for reasons of health. Both situations could be avoided easily if there were a few simple rules of etiquette developed to forestall them. Etiquette, in the best sense, exists to prevent embarrassment or awkwardness, and with so many people now on special diets, some rules for discovering and accommodating the restrictions are needed. There are, of course, basic differences between not liking something and not being able to eat it because of health. The basic question is one of fixing responsibility.


Should a host or hostess ask every guest in advance what he or she does not like or cannot eat? Or should guests volunteer that information when invited? Telling a host that you do not like a certain ingredient or dish is difficult and possibly rude, because it is presumptuously asking for special attention. But years ago, after preparing ratatouille for a dinner party, I discovered, too late, that one guest hated both eggplant and zucchini. That guest did not create a problem, because there were many other things to eat, but I felt badly because I could easily have prepared a different vegetable dish. Since then, I always ask guests whose food tastes I do not know, if there is anything they hate. Among the more surprising answers have been chicken, liver and other organs, lamb, fish, mushrooms, eggplant and even garlic, although when I come across someone who does not like that odoriferous bulb, I consider severing the friend ship at once. But when a prospective guest cannot eat an ingredient because he or she is allergic to it or seriously ill, it would seem that it is the responsibility of that person to offer that information.


If, for example, someone has been told to cut down on salt, that person might choose to eat just a small amount of a particular dish made with salt at a dinner party. On the other hand if the elimination of salt (or cholesterol or milk products or eggs) is critical, then the guest should make that known. Those on reducing diets might refrain from saying so and just eat small amounts, passing up the the most fattening dishes. But if the quick loss of weight is imperative, they might say so and offer to bring their own poached breast of chicken to the party. Anyone violently allergic to some commonly used (and perhaps uncommonly used) ingredient should also let that be known. – By Mimi Sheraton, New York Times News Service, 1983

Etiquette Enthusiast, Maura J Graber, is the Site Editor for the Etiquipedia© Etiquette Encyclopedia
Posted by Etiquipedia at 5:50 PM