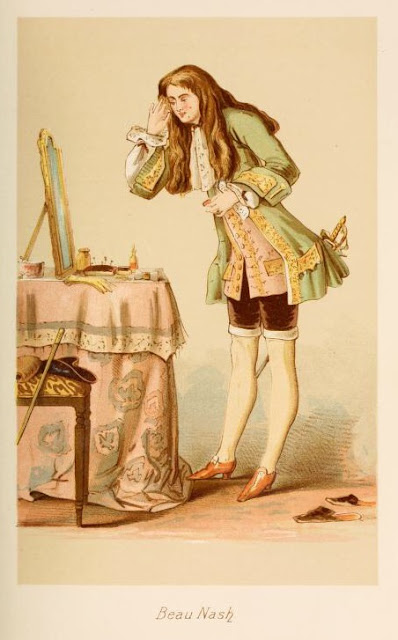 In 18th c. Britain, Beau Nash was a celebrated dandy, arbiter of Georgian etiquette and leader of fashion. He is best remembered at the spa town of Bath, the most fashionable resort in 18th-century England. – In 1704, after stints in the army and as a barrister, Nash became known as the “Master of Ceremonies” at a rising spa town - Bath. His was a leading, though unofficial, role in making Bath the Georgian era social center it became, and Nash’s became a job for life. Indispensable in Bath, he not only matched ladies with appropriate dancing partners at each ball, but he’d pay the musicians at many events. Nash would meet the newest arriving visitors to Bath and judge whether they were suitable to join the select “Company” of 500 to 600 people who had pre-booked tables there. He would broker marriages, escort unaccompanied wives when needed, and even regulated what gambling he could, by restraining compulsive gamblers or warning players against cardsharps and risky games. The Corporation of the city funded an elaborate funeral for Nash upon his death in 1761, and he was buried in the nave of Bath Abbey, not far from a monument memorializing him.

Bath, England and Its Celebrated
Arbiter of Manners
“Beau Nash of Bath was intellectually, and in the matter of actual power, a King indeed, in comparison with all the buffoon imitators who have followed him.”– Wakeman, 1882

The city got its name because of the hot mineral water that bubbles out of the ooze, something like 250,000 gallons every day at about 120 degrees. But the story only begins with the water. The city of Bath is steeped in history and tradition. Its secrets are told in art and literature. Its 18th century streets weren't made for automobiles, and the pedestrian is the kingpin.

Daniel Defoe (of Robinson Crusoe fame) summed it all up in the early 1700s: “We may say now it is ... a place that helps the indolent and the gay to commit that worst of murders to kill time.” Defoe was a little grumpy, but his words describe well the kind of goings-on in Bath at that time. The reigning Monarch at the time, Queen Anne, was enamored of the waters, and then as now, it became fashionable to do what the Monarchy does. The social whirl in Bath got kicked into gear by one Beau Nash, your basic good-timer, who became arbiter of taste, etiquette and parties.

Nash’s title was Master of Ceremonies, and he went about his job with all the aggressiveness of a public relations man. He led a crackdown on hoodlums so as to make the streets safe to walk, and he led a similar crackdown on those who didn’t dress or act right. Ostracism by Beau Nash was more than most people could stand, and soon the town’s social life was made over, according to Nash’s taste. Nash is noted for encouraging a new informality in manners, breaking down the rigid barriers which had previously divided the nobility from not only the middle-class patrons, but the gentry of Bath. Under Nash, Bath became one fashionable and fun place. It remained so for many years after Nash’s death in 1761.

Jane Austen spent time there and wrote Bath’s shops, amusements and entertainments into her novels. Thomas Gainsborough painted portraits for 20 pounds apiece. William Pitt governed from a simple flat. Bath held great appeal to the Georgians of the late 1700s and early 1800s, but fashionable and fun places in general faded in post-Regency era England. When the Victorian Era came to be after 1837, Bath's influence in British life faded along with the rest of them. – from an article in Santa Cruz Sentinel, 1987

Etiquette Enthusiast, Maura J Graber, is the Site Editor for the Etiquipedia© Etiquette Encyclopedia
Posted by Etiquipedia at 2:45 AM