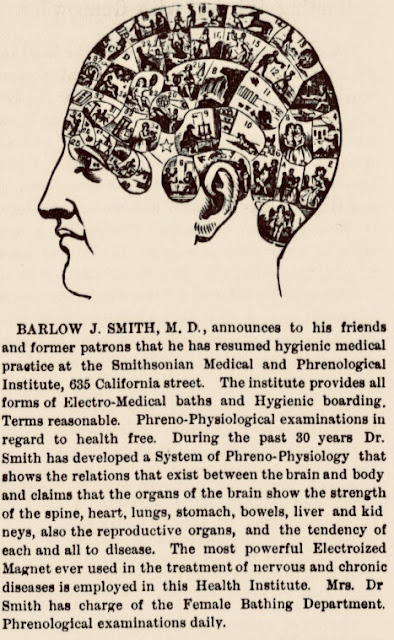 “When the minister is dull, and you cannot listen — this happens often enough to make a rule — study phrenology; examining the bumps of heads before you. An hour maybe passed thus politely and pleasantly...” – “Phrenology” enjoyed great mass appeal from the late 1700’s, the Victorian era and well into the 20th century. It has been wholly discredited by scientific research, however. Phrenology is the study of the conformation and bumps of the human skull, as indicative of mental faculties and traits of character, especially according to the hypotheses of 18th century German doctor, Franz Joseph Gall, and 19th-century adherents George Combe and Johann Kaspar Spurzheim

As to-morrow is Sunday, and many we know of are not quite as perfect in church etiquette as they might be, we give the following rules which should guide them in attending divine worship. We may remark first, that there is no etiquette for any place like the etiquette of common sense; it avails when the rules of the Chesterfields and the Hickmans often make one ridiculous. In entering church, then, with a lady, precede her when ascending and descending stairs, as also in seeking a seat. In one case it is especially polite; you act a sort of shield to her modesty, and then you save her the confusion of selecting a pew.

It is proper, if you arc a believer, to kneel or stand at prayer, according to the custom of the church. To disregard these is vulgar — at least, it shows too much false pride, or too little reverence for the requirements of Christianity. Excessive whispering during service is decidedly vulgar. It is sometimes necessary to address an undertone remark to your companion or companions, but seldom. Listen to the service— especially the sermon.

In this age of church opera, called music, you cannot help bearing that part of the ceremony. It would wake up a Van Winkle, but the sermon you may sleep over or disregard. It is wrong. Appear to hear, if you do not. A good way, is when the minister is dull, and you cannot listen — this happens often enough to make a rule — study phrenology; examining the bumps of heads before you. An hour maybe passed thus politely and pleasantly.

If you chew tobacco, do not use it in church. It is annoying to those around you, and then the Sexton gives you jessie.

Never leave church during service, unless it is absolutely necessary — as in sickness, a house on fire, or a professional call. It is vulgar to come late. Sometimes it is unavoidable; a person wishes to display it new dress, watch-chain, or perhaps a beau. It will occur sometimes that a poor goose wants to be driven from his seat — then it is proper enough also. These causes and the like excuse late coming, and the congregation endure them. Any other delay is unendurable.

Dress as plainly as possible. We don't mean that a lady should appear in her morning wrapper, nor a gentleman in his shirt-sleeves. A nice medium is the thing in all matters—ladies should not be taken for milliners’ showcases. nor gentlemen for be-jewelled and neck-tied monkeys. A plebian goes to church to show fine clothes, an aristocrat to show respect to God.

In entering and leaving the house, don't walk too slow like the shoddies, nor too fast like the bashfuls. In the one case, people ridicule yon for affectation; in the other, there is danger of knocking down the pews or of running over somebody, “Hasten slowly.”

When you look around too much in church, people think you want to show your profits, or that you want to attract attention to your style, or that you want to marry, or that, like poor wheat, there is not enough weight about your head to keep it still. Don't look too pious In church, either— it is as suspicious as too much levity. Religious worship is neither a joke nor an emetic.

If you feel extraordinarily devotional, begin to think about putting something into the treasury, and it willl shorten your face quickly, and spread over it the pleasant look of duty. – Lynchburg Virginia News, 1869

Posted by Etiquipedia at 1:28 AM