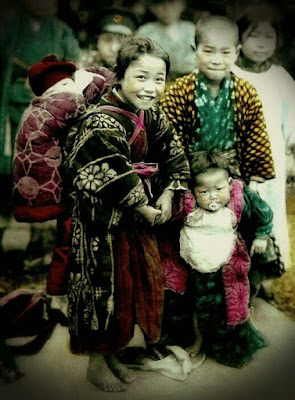 It Is Not Considered Good Form to Partake of Sweets
(or any other foods) on the Street in Japan...
Children Observe Rule

Homer Croy writes of the Japanese in Leslie's: “One day as I was going along the street I saw a candy man sitting on a stool beside his cart fashioning delicacies with his two flying thumbs. Taking a ball of candy mixture, he would give it a few pinches, a twist, dab on a red spot and there would be a fish. Taking up another ball he would give it a few twists and he would have a radish. Half a dozen of these, he would put into a thumb-made candy plate, the size of a chocolate wrapper, and sell for half a cent. Buying a plate of tiny delicacies I gave it to a girl, expecting to see her down it in good old American fashion, but instead of falling on it greedily, she made a courtly bow and tore down the street as fast as her wooden shoes would let her.

I looked after her in astonishment, thinking that this upset every child theory I had, and I determined to try it again. So I waited until the two flying thumbs had molded another delicacy and proffered this to a second child. Down the street she flew, too, her walnut knot of hair wobbling excitedly. When I bought the third delicacy I gave it to a child that was weighted down with a baby on her back and followed after, while she went bobbing down the street, the baby's head rolling heavily. I found her sitting on the floor, eating the sirupy fish and candy radishes with many delighted sucks and appreciative grunts. Then I understood; it was not polite to eat on the street, but under her father's gray tile roof it was the height of form to dispose of the sweets with all the gustatory gurglings that her delighted soul wished. – Sausalito News, 1916

Etiquette Enthusiast, Maura J Graber, is the Site Editor for the Etiquipedia© Etiquette Encyclopedia
Posted by Etiquipedia at 12:51 AM