Etiquette and a World Citizens Guide 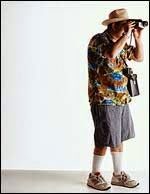 'Ugly American' abroad: Worryingly accurate? The world's worst tourists are American... according to Americans (and they admit to stealing hotel towels too)

Loud and brash, in gawdy garb and baseball caps, more than three million of them flock to other shores every year. Shuffling between tourist sites or preparing to negotiate a business deal, they bemoan the failings of the world outside the United States. That is the image most people have of the "Ugly American Tourist"


And then there is this guy...


Scott Disick, famous for impregnating a Kardashian a few times, traveled to London "...and in true Disick fashion, made sure he painted the town red like only he can. Among the hijinks he pulled off during his trip: He became British royalty in an authentic knighting ceremony after purchasing the title over the Internet. "Whether it's Sir Disick, Lord Disick, Count Disick -- becoming royal is going to get me the respect I deserve," Disick said prior to pledging his allegiance to the laws of England and Wales. "I don't have to be walking around like some peasant. I'm royalty!'" Us Magazine

Aside from those who buy titles over the internet, the reputation of the "Ugly American" abroad is not, however, just some cruel stereotype, but - according to the American government itself - worryingly accurate.

In 2004, the State Department in Washington joined forces with American industry to promote an image make-over by issuing guides for Americans travelling overseas on how to behave.  Under a 2006 programme, the "World Citizens Guide" was issued, featuring 16 etiquette tips on how Americans can help improve America's battered international image. The goal was to create an army of civilian ambassadors.


The guide offers a series of "simple suggestions" under the slogan, "Help your country while you travel for your company". The advice targets a series of common American traits and includes:

• Think as big as you like but talk and act smaller. (In many countries, any form of boasting is considered very rude. Talking about wealth, power or status - corporate or personal - can create resentment.)

• Listen at least as much as you talk. (By all means, talk about America and your life in our country. But also ask people you're visiting about themselves and their way of life.)

• Save the lectures for your kids. (Whatever your subject of discussion, let it be a discussion not a lecture. Justified or not, the US is seen as imposing its will on the world.)

• Think a little locally. (Try to find a few topics that are important in the local popular culture. Remember, most people in the world have little or no interest in the World Series or the Super Bowl. What we call "soccer" is football everywhere else. And it's the most popular sport on the planet.)

• Slow down. (We talk fast, eat fast, move fast, live fast. Many cultures do not.)

• Speak lower and slower. (A loud voice is often perceived as bragging. A fast talker can be seen as aggressive and threatening.)

• Your religion is your religion and not necessarily theirs. (Religion is usually considered deeply personal, not a subject for public discussions.)

• If you talk politics, talk - don't argue. (Steer clear of arguments about American politics, even if someone is attacking US politicians or policies. Agree to disagree.)


One of New York's top advertising executives said at the time that surveys consistently showed Americans were viewed as arrogant, over-materialistic, insensitive and ignorant about local values. That, in short, is the image of the Ugly American abroad.

The guide also offers tips on the dangers of dressing too casually, the pluses of learning a few words of the local language, use of hand gestures and even map-reading.

Of course, US foreign policy - and perceptions of it - has the biggest impact on the image of Americans abroad. President George W.  Bush recognised this when he appointed Karen Hughes, a close confidante, to head the country's public diplomacy push.  And individual Americans can also make a difference.

According to one business executive, "In many parts of the world, America is not getting the benefit of the doubt right now. People prefer to dump on us instead. But for many people, corporate America is their main point of contact, and that's where we come in."

Business for Diplomatic Action, which was formed in 2004, had in 2006 already distributed 200,000 -passport-sized guides tailored to college students going abroad.

At the time, a spokesman for the National Tourism Agency for Britain said last night: "Americans have a certain reputation which, for the majority, is undeserved. These guidelines sound like good common sense but they're not something the majority of our American visitors need. As tourists, they're out to enjoy themselves and have a good time. We continue to welcome them."

The U.S. government has stepped in many times before.  According to Amy Vanderbilt, "During World War II the Government understood the importance of teaching our military men and women some of the subtleties of proper social behavior in foreign lands. Proper American social behavior was not enough. Our soldiers and sailors learned to remove their shoes before entering a Japanese home, or a Mohammedan mosque, or a Buddhist temple. They squatted or sat cross-legged at table and ate out of communal dishes in Mohammedan lands and in various Oriental countries. They tried to remember certain shibboleths and taboos and what English words could not be politely used in English drawing rooms "bloody" and "fanny," for example. They noted that in England "napkin" or "nappie" often meant diaper; "flannel" meant a washcloth, and "serviette" meant a napkin as it does on the Continent. Our truck became a "lorry" or a "van," and our trolley was a "tram," a closet was a "cupboard," and molasses "treacle." "Tea" could be just that or the equivalent of our Sunday night supper. A shower was a "douche" and a tiny toy, a "dinkie," a boutonniere, a "buttonhole." To charge something was "to put it down," and to do an errand was "to run a message." Shortly, under military instruction and because it was more convenient, our men and women learned to do in Rome as the Romans. If this works under the stress of war, it will work in peacetime. As much as possible, while still identifying ourselves as Americans, we should behave as those we visit behave, not try to take the freest manners and language of our Main Streets abroad."


From articles originally printed in the The Telegraph, April 2006  By Philip Sherwell, and the Mail Online, March 2012, US Magazine and Amy Vanderbilt's Complete Book of Etiquette
Posted by Etiquipedia at 11:55 PM