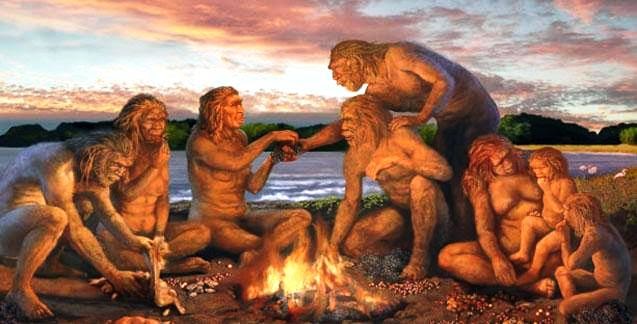 Depiction of early man communally cooking with fire ~ Table manners are actually older than tables. It is known that at least 9,000 years ago, people cooked stews, or soups, in pots. They would then dip spoons of bone or wood, with shells possibly attached to them, into the cooking pot, in order to eat. Some of the first rules that were established regarding communal dining, determined who could dip into the pot first. Even today, some Inuit families in the Arctic follow this age old tradition of eating from the group's common pot. Men get to dip first, followed by the women and children. At times, they don't even use spoons. They simply pick pieces of meat out with their fingers.

From the dawn of time, social skills and manners had to be created so that societies could survive. Early man's effort to interact smoothly with others, developed ways to make life easier and more pleasant. In doing so, certain practices developed for all aspects of life. Table manners were probably low on a long list of priorities, as man needed sustenance to survive. Undoubtedly, eating implements and utensils evolved out of mere necessity, not fashion. Hands and fingers were first utilized, but after fire was used to cook foods, burnt fingers surely led to the man's use of sticks, shells, animal bones and whatever else was handy, for bringing food to one's mouth. These early utensils did not last long and were eventually replaced with the development of copper and other more suitable metals. 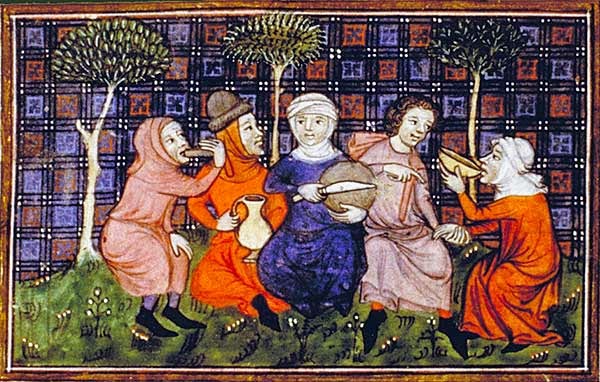 Depiction of medieval peasants breaking bread. Drinking directly from bowls and eating with one’s fingers and knives were the common ways of dining in England, Ireland and Western Europe. The “fingers of courtesy” were those used by the most well-mannered of Europeans– the thumb, index finger and middle finger of one’s right hand. Licking one’s fingers was not acceptable.

Though evidence that forks had been used throughout early history and during the great Roman Empire's days, the Dark Ages in Europe brought many changes. Customs that Western Europe had developed up to that point in time were, in many cases, abandoned. Dining with forks appears one of those customs. Spoons were abandoned for dining, as well. Double-edged knives, fingers and cupped hands were used by the majority Western Europe, along with hollowed out trenchers (a primitive form of a plate, made of dried bread). Spoons were merely used for serving. Forks were still being used in the Middle East and Africa, though they were more commonly used for serving. Chopsticks were favored by Asian cultures, though dining with one's hands was still a popular method among the more primitive of societies.

Soups and broths were drunk from saucers and bowls. Within time, bread trenchers were replaced by wood, pewter and porcelains, depending on the household and family budget. Pinky fingers were extended while eating, and kept away from the greasy foods so that they could be used for dipping into expensive spices. Ginger, along with star anise originating from China, were popular additions to the European palate. Cinnamon from the Spice Islands and nutmeg from the Maluku Islands were coveted as well. This demand for spices was the key to Europe's expanding world trade.
By 1533, when Catherine de Medici brought several dozen small dining forks with her upon her arrival in France to marry Henry II, she was the first notable to have used them in Western Europe. Considered an oddity at first, the forks were slowly popularized in European Courts. Books on courtly manners and courtly customs were also being written and read more frequently, though much of the general European public was oblivious to them. Silver utensils of all sorts, along with Chinese inspired tableware, were created for the wealthy. Many travelers carried their utensils with them, either in cased sets or as foldable articles.


After the tea... An 18th century Swiss painting of a tea service


Tea, a favored drink for many centuries in the rest of the world, wasn't truly popular in Europe after its original arrival on ships from China. It was thought to be more of a medicinal drink than a social beverage. With time though, it was embraced by European nobility. No different from anything else as embraced by the wealthier classes, tea drinking popularity trickled down do the general society. By the 17th century, “Afternoon Tea” became an elegant custom and regular pastime in Europe, and newly colonized America. 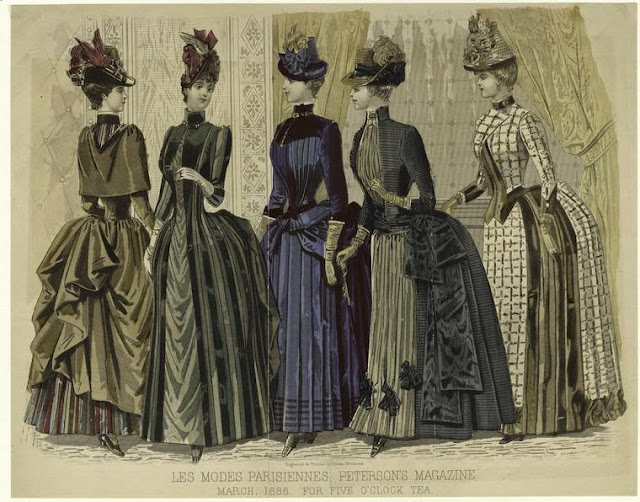 According to legend, one of Queen Victoria’s ladies-in-waiting, Anna Maria Stanhope, known as the Duchess of Bedford, is credited with originating afternoon tea in England. This tale is often disputed by the French, whose Marquise de la Sablière, supposedly invented not only the idea of afternoon tea drinking, but initiated adding milk to the tea. With the likelihood that this scenario was played out in the homes of a variety of nobility in various European countries, the debate between the British and French goes on. It may never be resolved, but who ever first started this simple afternoon repast, saw it suddenly blossom into a uniquely popular afternoon custom that required its own form of etiquette, tea tables, tea pots, cups and equipage.

As table manners evolved throughout Europe, and with more foods were being made available, larger and more extensive sets of silver were being created for the table. By the mid-1800s, silver electroplating made utensils affordable for the growing middle classes of Europe and America. Silver plated utensils and “sterling” dining implements were marketed as "heirlooms of the future" and as luxury items that every household now needed, so that they could be passed down through future generations. Soon, every food item had its own utensil. 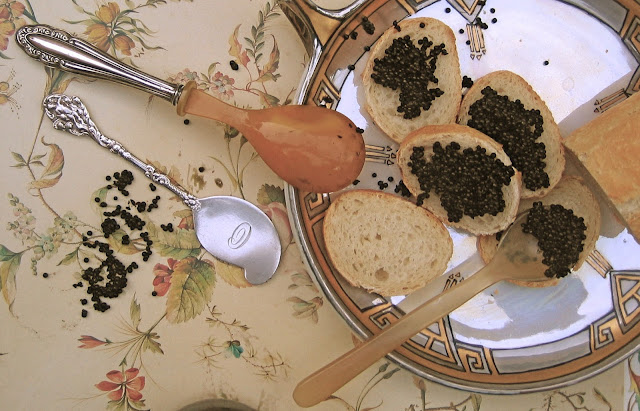 By the mid 1800s, the Victorian Era host and hostesses were fond of highly specific and elaborately decorated flatware. Bread was served with a specially designed fork. There were numerous styles of ice-cream spoon/forks, corn scrapers for Victorian green corn, orange spoons, mango forks, and implements designed specifically for serving olives, peas, baked potatoes, berries, crackers, Saratoga chips and tinned fish, such as sardines and herring. Even crackers had their own scoop-like serving spoon. Pickled foods had ornately adorned forks, spears and tongs, along with pickle casters to hold them in. 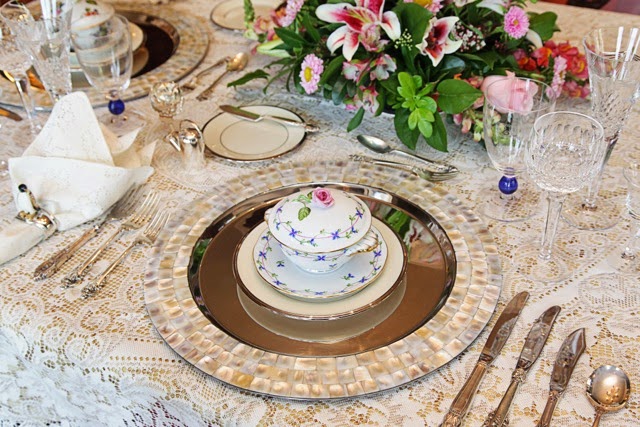 A setting for at least five courses, with a soup served first


The finest of dining became an event with the silver utensils flanking place settings of beautiful porcelains and crystal. These were items that separated the wealthy of society from those not so fortunate. The expression that one "knows the correct fork to use" suddenly became synonymous with being well-mannered, though one had little to do with the other. It was simply society's way of distinguishing between class lines.

The late 19th and early 20th centuries also saw a greater influx of reading material for the everyday homemaker and businessman on how to avoid social faux pas in everyday life. Numerous popular books on etiquette, dress, culture and decorum came from society mavens and gents, determined to spread the word on proper decorum. Most books also covered the dying of fabrics, grooming tips, color coordination for skin tone, hair color, eye color and dress and even palm reading (a favorite Victorian past time for women). Many included advice on greeting heads of state and European royalty, never mind the fact that the reader of these books had the slimmest odds of an opportunity to use the information.

By the late 1900s, society in the presumed "civilized" world began to accept a more relaxed standard of manners, and continue to evolve. Though invitations still need to be responded to and appropriateness of one's dress is still a factor in how others view us, modern 21st century society seems a bit befuddled when it comes to etiquette and manners. Fortunately, books continue to be written on the subject, which encompasses not only the acceptable customs from before, but new etiquette for the leaps taken in technology over the last thirty to forty years. – Sources include Etiquipedia Site Editor Maura Graber, tea specialist Bernadette Petrotta and numerous historical writings.

Etiquette Enthusiast, Maura J Graber, is the Site Editor for the Etiquipedia© Etiquette Encyclopedia
Posted by Etiquipedia at 9:41 PM