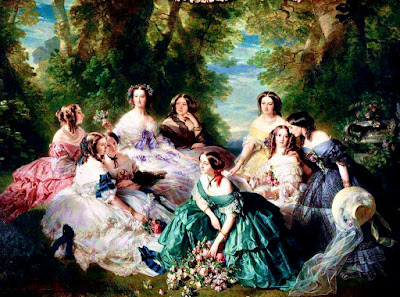 Empress Eugénie enjoyed entertaining her guests and granted her favor to them the moment of almost any gleam of sunshine in the storm which nearly ruined her birthday celebrations. – Above: Empress Eugenie surrounded by her Dames du Palais, circa 1855. Her six ladies-in-waiting (later increased to twelve), or dames du palais, were mainly chosen from among her acquaintances prior to her marriage. They were headed by the Grand-Maitresse Anne Debelle, Princesse d'Essling, and the dame d'honneur, Pauline de Bassano.– Public Domain Image

Over the prudent counsels of M. Fould, in virtue of which the Court has gone to Compeigne, will hardly profit her Majesty, or the three series of her invited guests, if the present rain and wind are to continue. However, it appears that the Empress is very prompt in making the most of any gleam of sunshine, vouchsafed in the intervals of the storm. The moment the rain holds up, sovereigns and guests turn out to take advantage of it, and two or three hunts have already taken place in the forest, while concerts, plays and dancing have gone on brilliantly in the evening.

Her fair Majesty's birthday has just been celebrated at Compeigne, where the guests had the honor of being admitted to offer their felicitations and present bouquets. The officers of the Chasseurs of the Guard — which regiment seems to consider itself as specially devoted to the Empress – went down to Compeigne to present a magnificent bouquet. The excellent asylum founded by the Empress at the Vesinet, to afford a month's country air to women-patients from the Paris hospitals, also sent a deputation and a bouquet. The palace seems, in fact, to have been filled with these floral offerings, and at night the park was illuminated, and a quantity of fireworks were let off, in spite of the rain, the grounds being thrown open and filled with spectators.– Letters from Paris, 1865

Etiquette Enthusiast, Maura J. Graber, is the Site Editor for the Etiquipedia© Etiquette Encyclopedia
Posted by Etiquipedia at 2:41 AM