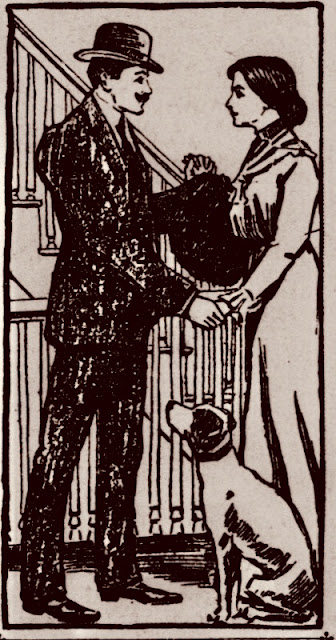 “There is no worthier accomplishment for a man with a moustache than to take soup in an inoffensive manner… and by no means should the moustache be used to strain the soup.” –Cornelia Dobbs’ 1908 book, Guide to Manners

Is Clean Shaven Man Losing His Popularity? – Smooth Face Fad Growing in Disfavor Abroad —————————————————
London Women Admit That They Prefer to Be Kissed by Wearers of a Mustache — “Dear Man” With Mustache and a Tickle Popular


LONDON, July. 7.— Is woman’s admiration for the man with the clean shaven face waning? Many men and women In London say it is, and a revival of the mustache is promised. A well-known woman writer of fiction confesses to liking the mustache. She says: “To speak quite truthfully, I do not like beards; upon that point I am firm. But whether a mustache is or is not an ornament, I am not quite certain. Men in pictures and men on the stage look best with clean shaven faces and I like my hero in fiction to possess clear-cut features, a hairless chin and an unshaven lip. If he were described as plump and bearded I should detest him. But a mustached husband I could ask for half a dozen hats at a time, whereas the stern set mouth of the clean shaven one, pursed up to utter a rigid ‘No,’ before my words were fairly uttered, would, I am certain, terrorize me into meekly suggesting one.


“I asked my dearest girl friend to arbitrate upon this important question and her ready reply leads me to fancy that she favors the mustache. Says she: “‘A dear man almost kissed me once. It was in Aunt Gwendolyn's conservatory and if Aunt G. had not at that moment seen fit to whisk out of the drawing-room almost into our united arms. I should have been able to state with decision whether I prefer the kisses of the smooth lipped man, or those of one of the mustached persuasion. The brushing of this man’s mustache upon my cheek I thought distinctly pleasant; it seemed to promise something different from the ordinary experience.

‘Kipling somewhere says, or makes a young girl say: “To be kissed by a man without a mustache is like eating an egg without salt.” I think, so far as my experience has gone, that I am in agreement with this opinion. After all, you see, one does not expect a man's kiss to be just like a woman’s. Army men, I opine, owe some of the popularity they enjoy among my sex to the mustaches they wear. Who would not rather be taken out on the river by a young lieutenant than a briefless barrister, whose academic honors are too deeply written on his hairless face? The young lieutenant is a figure of romance, with all the charm and virility of the grown up, though still juvenile, cavalier, whereas the boy barrister is an absurd example, an old head on young shoulders, weighed down with responsibilities and cares.

“But when a man has left the golden age of extreme youth, then, I fancy, he looks handsomer and younger unshaven. That is because so many men wear mustuches for their health’s sake, when they are over 60, ugly, grizzled, straggly mustaches, which they declare filter the air, or keep them from catching cold (a frequent excuse for that abomination, the long beard), or do something else wise, but not picturesque; perchance conceal a weak mouth or unbeautiful teeth, or lessen the apparent measurement of an over important nose.” – Special Cable to The Herald, 1906

Etiquette Enthusiast, Maura J Graber, is the Site Editor for the Etiquipedia© Etiquette Encyclopedia
Posted by Etiquipedia at 2:27 AM