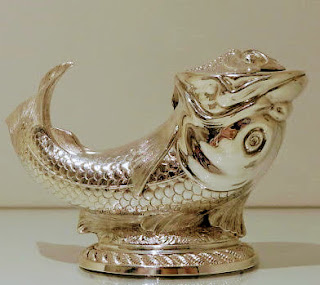 An unusual and highly valuable, antique silver, fish-shaped, Victorian spoon warmer. These were used in very large, drafty estates, to keep the spoons from “downstairs” warm for the meals served “upstairs.” –  “It was here that for the first and last time in his life Mr. Campion made the acquaintance of those silver-plated cornucopias which, in Victorian times, were supplied to the diner filled with hot water, so that he might warm his spoon before partaking of that greasy delicacy called thick soup.” –Marjorie Allingham

The secret vice of etiquette is to play guessing games with old pieces of silver. The stranger looking an object say, a combination of writhing bodies with spouts, or tongs and clawed footsies the more fun it is to ask, “And what do you suppose THAT is?” Then, again, perhaps this vice is not entirely secret. Miss Manners has noticed that people who fail to acknowledge the daily toils of etiquette as it strives to make the world bearable in small ways, believe its only function is in connection with peculiar silver. Under etiquette's kindly veneer, they seem to believe, it is really only a system by which people who have the time and money to waste in acquiring funny silverware, endeavor to make those who don't, feel inadequate.

The object such detractors choose to bolster their slander is usually the humble fork. “I never know what fork to use,” they will brag, as evidence that they are above snobbish games. The fact that the fork is a household mainstay at all levels of society, the use of which can be, and routinely is, mastered by a child of 3, makes it a strange example. Therefore, Miss Manners will now offer some better ones. In the spirit of the parent who says, “Stop crying or I'll give you something to cry about,” she suggests that the next time they complain about esoteric items of silver, they choose an example among the following items. Miss Manners has helpfully divided these into two categories and supplied some dubious etymology.

A. What in the Heck Is That?

B. Any Fool Can Understand What It Is, But What Do You Need It For?

Etiquette Enthusiast, Maura J. Graber, is the Site Editor for the Etiquipedia© Etiquette Encyclopedia
Posted by Etiquipedia at 12:41 AM