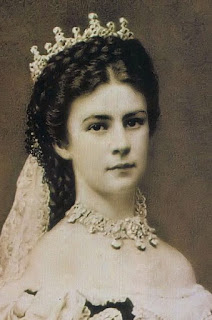 Chafing and frustrated at the strict regimen, etiquette and ceremony of Habsburg royal life, Empress Elizabeth, or “Sisi,” routinely defied protocol. Her mother-in-law, disapproving of Elizabeth, named her first child after herself and insisted on taking control of the child. In fact, her mother in-law demanded she give up control and allow her to rear all of Elizabeth’s and Franz Joseph I’s children. Elizabeth holds the record as the longest reigning Austrian Empress. For 44 years, Elizabeth championed independence and individualism. Elizabeth was assassinated when visiting Geneva, by an Italian anarchist. Upon death, Elizabeth became a world-renowned icon.


We are not, after all, to be permitted to catch a glimpse of the fair Empress of Austria, though she did pass through Paris a few days ago. About a thousand people went to the railway station to see her come in, but the lovely Elizabeth, at the last moment, quickly changed her destination and came into Paris by another route, thus disappointing the eager crowd of sightseers. She is well worth looking at, is this fairest of Royal ladies, though she is 38 years of age and a possible grandmother besides.

I saw her at Vienna ten years ago; she then looked about 20, slender as a reed and graceful as a deer, with the lovliest dark eyes in the world, and such a profusion of dark silky hair that it fell, coil upon coil, from under her coquettish little hat, only restrained by the meshes of a fine silk, hair net. Her style and elegance were unsurpassable, far exceeding, to my mind, the more artificial graces of Empress Eugenie. She dresses very simply now, it is said, usually in black, gray, or lilac, never having worn gay colors since the death of her eldest daughter, several years ago.

Her manners are marvelously sweet and winning, and she is as popular as she is beautiful. Truth compels me to state that it is currently reported that she henpecks her Imperial spouse unmercifully, and that he, like a wise man, submits quietly to her dominion. When she first arrived at the Imperial Court, she gave immense offense to her haughty mother-in, law, the Archduchess Sophia of evil memory, by insisting upon going out walking (think of profaning the sacred feet of the Empress of Austria by contact with the vulgar earth!) and carrying an umbrella, which last is, we believe a fatal sin against Royal etiquette.  She inherits the simplicity of her manners from her father, the Archduke Maximilian Luitpold, of Bavaria. This gentleman always travels very quietly, and with no more state or form than any ordinary private gentleman.

He was recently on his way from Munich to Vienna to visit his daughter. In the same compartment in the train with himself, was a talkative little Austrian tradesman, who soon got into a conversation with his quiet-looking companion After talking over matters and things for some time, and getting ample information about his business, etc... he asked: “And, pray sir where are you going?” “To Vienna.” “On business?” “No, to visit my daughter who is married to an Austrian.” “Is your son in law in a good business?” “Well— tolerably good— but troublesome at times.” “What is he?” “The Emperor.” At his answer, the poor little man became covered with confusion, nor could all the laughing protestations of the good-natured Archduke avail to reassure him and he darted out of the carriage at the very next stopping-place. – Paris Letter to the Philadelphia Telegraph, 1875

Etiquette Enthusiast, Maura J. Graber, is the Site Editor for the Etiquipedia© Etiquette Encyclopedia
Posted by Etiquipedia at 9:23 PM