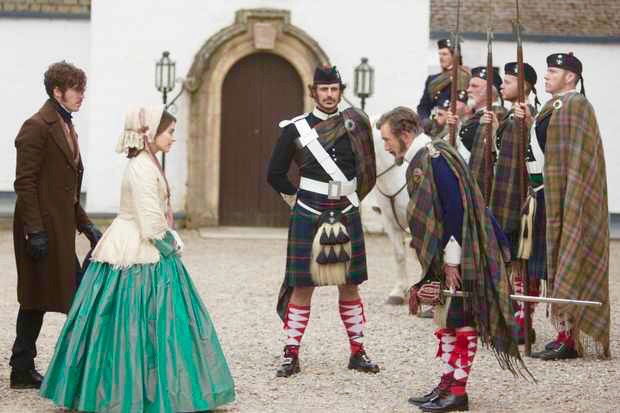 A trend for tartan and tweed was inspired across the Kingdom due to Queen Victoria’s and Albert’s love of Scotland. They visited Scotland repeatedly, and after taking possession of Balmoral in 1848, they actually built a castle of their own.

A correspondent, after picturing the simplicity of the life at Balmoral during the Queen’s stay there, describes one of her ordinary, everyday breakfasts. The following is the menu of the breakfast served one day last week:

Scotch porridge, cold rump steak pie, hot rump steak, cold gammon of bacon, boiled eggs, Scotch scones, brown bread, butter, honey, tea, coffee, and a kind of cocoa specially prepared for the Queen. The porridge was placed on the sideboard, and was served to each guest in blue and white china basins. These basins were filled by the attendants, as a matter of course, without any question as to whether porridge was wanted or not. It was evidently required by Court etiquette that the meal should be begin with this solid foundation, and that individual tastes of the honored visitors had to be kept in abeyance.

Our informant expresses surprise that there was no game on the table, considering that to his certain knowledge, the larder was full of grouse shot by Prince Henry and the keepers, which certainly wanted eating. He is probably not aware that the Queen cannot tolerate the smell of game the first thing in the morning, and only allows it at the  later meals, out of deference to the tastes of others.—London Correspondent for The New York World, 1888

Etiquette Enthusiast, Maura J. Graber, is the Site Editor for the Etiquipedia© Etiquette Encyclopedia
Posted by Etiquipedia at 12:11 AM