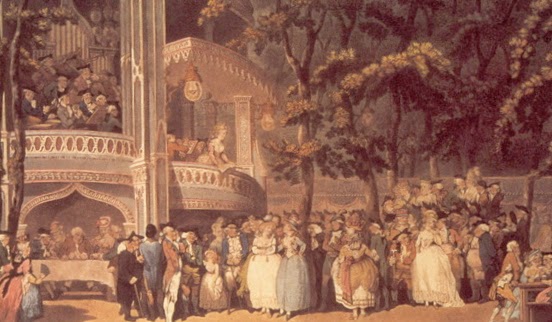 Depiction of the infamous Vauxhall Tea Gardens, which were opened in 1732.

In the early 18th century, when the popularity of tea spread in Great Britain, it became an essential part of one's entertainment outside of one's home.

From the tea gardens, soon came the idea of the tea dance. Dance was included as a part of the day's festivities. Tea dances remained fashionable until World War II when they lost popularity. But tea dances are still held in the UK today.

The charge for entrance to fashionable tea gardens, such as Vauxhall, included tea with bread and butter, which were welcome refreshments after the day's entertainment. But it was steady urban growth in the early 19th century,that led to the closure of the gardens, leaving the taverns, inns, hostelries, etc... as the only establishments still serving tea.

Tea eventually began to play an important role in the British temperance movement. In an attempt to convert drinkers and to raise money for the cause, the battle against the consumption of extremely high levels of alcohol (most popularly gin) was organized at tea meetings, held all over Britain. It is naturally believed that 'teetotal' was derived from the beverage.

A portion of the flamboyant sentimentalist, Nikolai Karamzin (Letters of a Russian Traveller 1789-1790), description of Vauxhall:

“The London Vauxhall brings together people of every social standing - lords and lackeys, fine ladies and harlots. Some come here as actors, others as spectators.

“I visited all the galleries and looked at all the pictures, whose themes have been taken either from Shakespeare's dramas or from recent English history. The walls of the large rotunda, where music is given in rainy weather, are covered with mirrors from floor to ceiling. Wherever you look, you see ten living portraits of yourself.

“At about twelve o'clock supper was served in the pavilions, and horns sounded in the groves. Never in my life have I seen so many people seated at table. It looked like some kind of magnificent feast. We chose a pavilion, too, and ordered chicken, anchovies, cheese, butter, and a bottle of claret. This cost about six rubles.

“Vauxhall is two miles from London, and in summer is open every evening. One pays forty kopecks to enter. I returned home at dawn, completely satisfied with the whole day.”

Posted by Etiquipedia at 2:19 AM