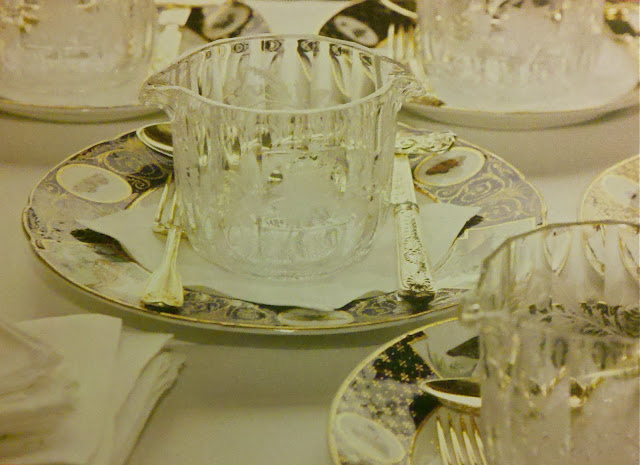 
The Rise and Progress of the Fingerbowl... With a Bit About Napkins
“Pray tender some information,” writes A.H., in regard to finger-bowls after dinner. The history of the dinner-table etiquette, as far as the cleansing of the finger goes, has caused a great deal of discussion. In “Notes and Queries” some information was asked about it a number of years ago, but not any very satisfactory responses were received.

Table manners and table equipage have been derived from the French. Strange as it may seem, a great many dinner amenities owe their origin to the East. Bibliophile Jacob says somewhere that the napkins during a repast were possibly brought into use in Europe after the Crusades.

Oriental habits at dinner, where the Turk of the old school to-day, having no knife or fork, plunges his fingers in the pilau, is but a continuation of customs of the time of Saladin. The Oriental is excessively clean in his habits, and between the fingerings of the viands and some of the manipulations of a cook with his dishes, really the difference is only this that the Turk who picks out a peculiar nice titbit to offer to his guest does it in view of everyone, while the cook’s prior actions are not seen.

As fountains were over spurting and gurgling, Harun al Raschid’s banqueting halls, opportunities to cleanse one’s fingers in the flowing waters must have been over at hand. Oriental people retain the habit of hand or finger washing after a dinner.

The method is not, perhaps, adapted to our customs, yet is a very sensible one. A servant, after the repost, makes the round of the table, (the guests are seated on low cushions on the floor) holding a copper vessel, provided with a very long but narrow spout. In the other hand he carries a wide deep copper basin. A tiny stream of water is poured over the fingers of the guests into the basin, while another servant follows with a towel. 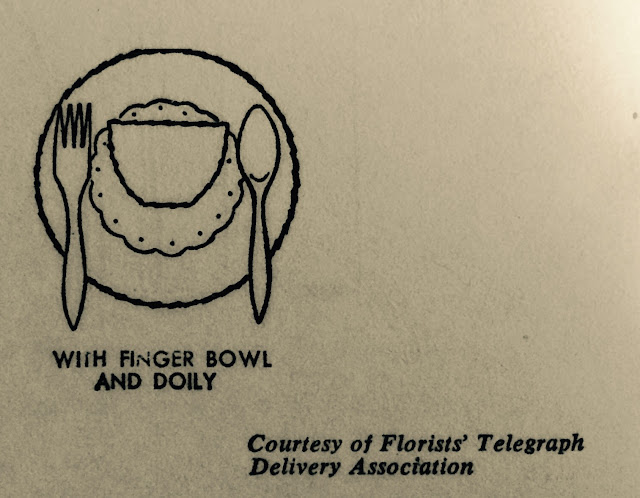 
The first portion of the performance is proper enough; but as one towel usually serves or all guests, a kind of universal sack towel, delicate-minded Europeans rather dislike the custom. It is not necessary to go further back, and refer to the Biblical habits before and after partaking of food.


As to the more modern custom, Brillat Saravin, whose book on the Physiologie du goût (The Physiology of Taste) was written in the early part of this century, inveighs against the fingerbowls. “It was about 40 years ago that some people in good society – they were most always women – commenced to wash out their mouths (rincer la buche) after their meals." Brillat Saravin deprecates the custom, and calls it useless, indecent, and disgusting, rather directing, however, his criticism against the mouth-rinsing than the finger-dipping. It is useless, he writes, “because the mouth is in excellent condition at the end of a repast, when fruit has been partaken of, or a last glass of wine or water has been imbibed”.

Say what one may the cleaning of the mouth after dinner is a disgusting habit, and no screening of this operation, by placing the hand before the mouth, can conceal, its objectionable features. If an after-dinner ablution has to be performed, especially when fruit is eaten, it should be restricted to the use of the finger-bowl alone.

The smaller goblet then introduced in the fingerbowl should be discarded, unless in order to add completeness, a tooth-brush were added to the paraphernalia. No attempt to lay down the laws of etiquette can be attempted in this column, yet if A.H. may have observed the behavior of nay number of well-bred guests at a table, an inquirer must have noticed that not one person in ten to-day makes use of the objectionable mouth-glass. To drive it entirely out of use, it would be only necessary for someone to follow quietly, yet not too markedly, the actions of a pretty woman in the act of cleansing her mouth.

Where she a great lady, armed with a triple cuirass of aplomb, she could not stand even the semblance of a few inquiring looks in which some mute astonishment was mingled. Now, can there be any action at a dinner-table among well-bred people which, when observed, should cause inconvenience? Fingerbowls, then, are not objectionable, but goblets in the fingerbowls for other usages are certainly, as Savarin called them, "Inutile, indecente, et dédégoûtante" or "Useless, indecent and disgusting." –New York Times, 1873

Etiquette Enthusiast, Maura J Graber, is the Site Editor for the Etiquipedia©. Etiquette Encyclopedia
Posted by Etiquipedia at 2:00 AM