Etiquette of Mote Spoon Use 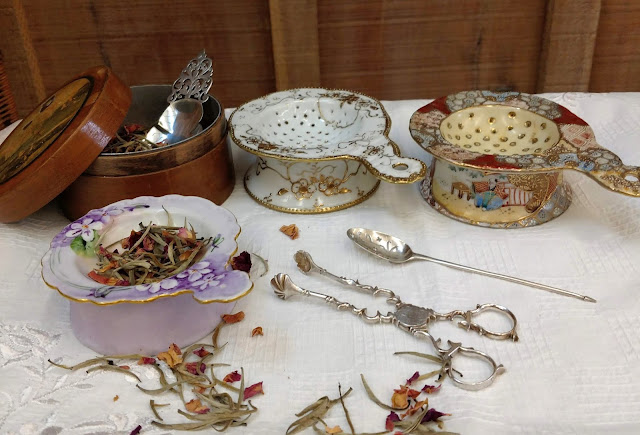 Shown above, 3 Victorian era, hand painted, china tea strainers next to an Edwardian era, treen tea caddy, holding a sterling tea caddy spoon. Also shown are Regency era sugar tongs and a Georgian era mote spoon. Tea caddies are special containers used to store tea. When tea was first introduced to European market, tea was extremely expensive, and often kept under lock and key, under the watchful eyes of the mistress or master of the house.

Seventeenth century and 18th century “mote spoons” were originally known as “tea strainer spoons.” In that time period, a speck or tiny piece of something was called a “mote” – in this case, it would refer to a bit of tea leaf. back in the Georgian era, the loose tea leaves were added directly into the teapot and then the tea was poured into waiting cups. It was difficult to keep errant leaves from escaping into the tea cups, which would cause the tea to continue steeping, resulting in bitterness. By using the sharp, pointed end of the mote spoon, one could remove blockages from the inside of the spout of the tea pot, thus saving the intended flavor of the tea. This was one easy way to ‘de-mote’ one’s teapot. But what about one’s cup of tea?

As with many other tea accoutrements, there is a debate in the overall tea community as to how the mote spoons’ pierced bowls were originally used. While the pierced bowl was perfect for skimming the tea poured into a cup, to remove any stray motes or bits of tea leaves, it also, as others believe, was correctly used for removing tea leaves from the tea caddy, allowing the dust or mote to drop through its pierced holes prior to use. This was presumably done by gently tapping the side of the spoon. Until more information is uncovered though, the debate will remain unresolved. – Information from a variety of sources, including TeaHappiness.com and MortonsAntiques.com

Etiquette Enthusiast, Maura J Graber, is the Site Editor for the Etiquipedia© Etiquette Encyclopedia
Posted by Etiquipedia at 3:28 AM