“The stocking in which the Christmas treasures of our small boys and little girls are placed is capacious enough to satisfy any reasonable child, while it is not so large as to overtax the pockets or energies of parents. Could the same sort of stocking be imported and acclimated in New England and the West, Christmas trees would no longer have any excuse for being, and the stocking would be universally accepted as precisely the thing needed to fill every household with juvenile happiness on Christmas morning.” Life Magaxine, 1883 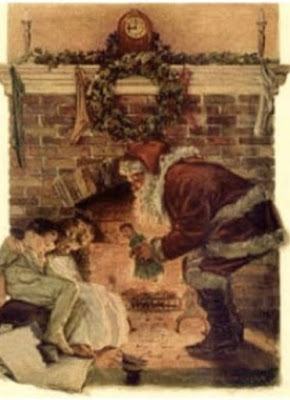 “In the nineteenth century, poor children dreamed all the year round of getting the precious, scented present of an orange for Christmas. Most of them did not know what an orange tasted like, or even if they would dare eat that golden, almost magical fruit.” - www.foodtimeline.org

Why give oranges at Christmas?

Food historians trace the practice of proferring fresh fruit gifts for major celebrations to ancient times. These exquisite, perishable objects were expensive and reflected the giver's wealth and status. Indeed, before the age of speedy transportation and reliable refrigeration, fresh citrus fruit was out of reach of the average person. As time progressed, fresh fruit out of season (including oranges in Northern Europe and/or North America) was possible, but still rare. This made these items perfect Christmas gifts. Today, when oranges are inexpensive and readily available throughout the year, this little history tidbit is overlooked. A child today who encounters an orange at the toe of his Christmas stocking is unlikely to appreciate the message unless someone takes the time to share the history.

"Strange and exotic fruits had begun to reach Britain...through trade with southern Europe where oranges, lemons and pomegranates were cultivated. The original home of the citrus fruits lay in northern India. They had been known to the Romans under the name of "Median apples', having apparently arrived from Persia; and their juice had been used as a medicine, and occasionally also to sharpen the tang of vinegar...The first Englishmen to enjoy oranges, lemons and 'Adams apples'... were probably crusaders who wintered with Richard Coure-de-Lion in the fruit groves around Jaffa in 1191-2. About a hundred years later citrus fruits had begun to arrive in England itself...

Also on the spice ships from southern Europe came great raisins, 'raisins of Corinth' or currants...prunes, figs and dates. All were consumed in vast quantities by the well-to-do, for the sweetness of dried fruits was greately appreciated while sugar was still rare and expensive. Poorer people ate them principally in festive pottages and pies during the twelve days of Christmas, but the rich enjoyed them at other times , too." — From “Food and Drink in Britain: From the Stone Age to the 19th Century,“ C. Anne Wilson [Academy Chicago:Chicago IL] 1991 (p. 332-4)

Etiquette Enthusiast, Maura J Graber, is the Site Editor for the Etiquipedia©️ Etiquette Encyclopedia
Posted by Etiquipedia at 11:59 PM