For we Italians, food is not just a source of sustenance, behind it there is a deep and rooted culture over the centuries. Street food has always been essential for travelers who walked the streets of our country since Ancient Rome. At the time, the Romans used to eat their meals standing up, quickly, stopping in places overlooking the street. Important remains of these structures remain in Rome and Pompeii. In the city destroyed by the eruption of 79 A.D., more than 200 have been identified. This is not surprising considering that, from the archaeological excavations it appears that very few houses were equipped with kitchens, for this reason almost all were forced to go to the many “restaurants” present along the city streets.
The thermopolia or popinae and the cauponae were the places where, at the time, soups, meats, fish, dried fruit were prepared, all food that was then sold to patrons. Often these places were associated with hotels that hosted travelers. The structures, some still visible in Pompeii, were composed of a counter that contained the dolia, large containers in which food was stored and on one side, on the other hand, other vases were arranged, containing other dishes and a fire to heat them, if necessary. They were real stalls selling food, just like the ones you happen to find in the streets of our cities for parties or festivals. An invention, that of “street food,” which is ancient, but still very current. 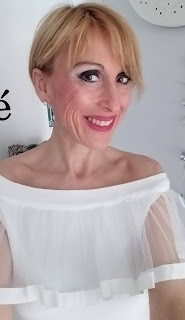 Contributor, Eva Sorribas Costantini, was born in Barcelona Spain, but currently lives in Rome Italy. She is a graduate of La Sapienza University of Rome, specializing in in the courses of Etiquette, Good Manners and Costume Paths, Ceremonial, Protocol and Institutional Etiquette. She has performed Basic and Advance courses in Etiquette and Good Manners at the Accademia Italiana Galateo in the city of Rome, and has studied British Etiquette, English Afternoon Tea, Social History of Tea and Colonial Drinks. She also worked in the luxury retail fashion sector in window dressing, image consultancy and fashion history. Her expertise is in the history of dress code and court dresses with a focus on the psychology of fashion, gender identity, body, image and symbolism of color.

Etiquette Enthusiast, Maura J Graber, is the Site Editor for the Etiquipedia© Etiquette Encyclopedia
Posted by Etiquipedia at 12:00 AM