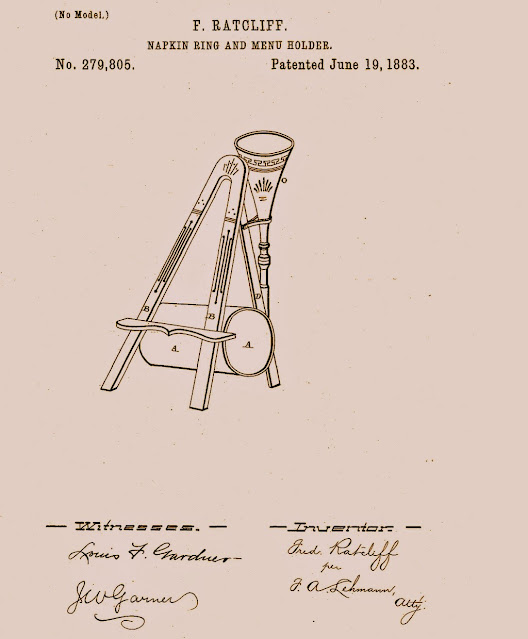 It seems that Miss Manners “has survived into a world where people believe that napkin rings are useless but decorative items to be put out on the company table. Of course there are always fresh napkins out for company, which is why napkin rings were strictly an informal, family device that would be considered ludicrous at a dinner party.” —
A little over 100 years earlier from when this article was written, a gilded age design for a combination napkin ring, menu holder and bud vase was patented.
— Photo source, Etiquipedia library

The Finer Points of Correct Manners

Qualms were a sensation unknown to Miss Manners. If you invariably do everything right, there is never any occasion for that sudden "whoops" that starts a downhill slide of misgivings.

So it was rather a shock for Miss Manners to experience a slight semblance of this feeling in regard to, of all things, a dinner-table practice. Miss Manners' dinner table is not, as you can imagine, lax. But twice in a week, different people had expressed shock upon discovering that at the Miss Manners family dinner table, napkin rings are used in the traditional way. That is to say, each member of the family has a different napkin ring (in this case, the designs are different, but it is also customary to have similar rings with identifying names or initials), replaces it on the napkin after a meal, and thus is able to receive the same napkin for use at the next meal.

"Do you mean to say," each of her interlocutors had asked with widened eyes and mouths, "that you don't have fresh napkins at every meal?"

Or so Miss Manners had thought. It was the expressions of surprise that prompted her qualms. Are other people doing a load of napkins every day, one for each meal that each member of the family takes at home?

Since Miss Manners agrees that in an ideal world there would be no recycling of used napkins, ought she to be spending her time attending to the home question rather than the world's etiquette problems?

Not really. The world of etiquette is not unfamiliar with compromise and trade-offs, and Miss Manners can live with recycled napkins in order to have time for doing other things, and in order not to create a water shortage.

It was only later that Miss Manners discovered the real meaning of those questions.

It seems that she has survived into a world where people believe that napkin rings are useless but decorative items to be put out on the company table.

Of course there are always fresh napkins out for company, which is why napkin rings were strictly an informal, family device that would be considered ludicrous at a dinner party.

But it seems that there are also now fresh napkins out for each family meal - not because household laundry has increased, but because "napkin" has come to mean something made out of paper. Cloth napkins are thought to be too much trouble in a busy modern household.

Miss Manners urges a revival of the daily use of cloth napkins, along with the labor-saving napkin rings. Contrary to anti-etiquette propaganda, various prematurely abandoned tableware devices were not invented in order to put sensible people to unnecessary expense and trouble. On the contrary.

For example, finger bowls have survived only where they are least needed - at formal dinners, where there is little likelihood of finger food being served.

The effete versions on doilies, with floating rose petal, to be put to one side untouched by the diner, disguise the fact that finger bowls properly serve the purpose of a moist towelette in a package.

Salad knives have pretty much passed out of use (but not at Miss Manners' table), but it continues to be impossible to cut a wedge of lettuce or tomato with the side of a fork.

In regard to napkin-ring usage, Miss Manners has been asked whether it isn't disgusting to reuse a napkin. Not if you also use another quaint old tradition that has also fallen into disuse. Table manners.— By Judith Martin, Miss Manners, 1989

Posted by Etiquipedia at 1:47 PM