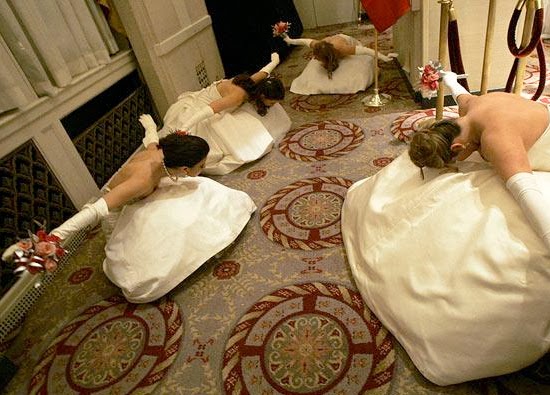 Although a debutante is a novice in that worldly wisdom which time imparts, it is presumed that she has been instructed in the best principles of society, and that she is prepared to fulfill its obligations. In the best society everywhere the appearance of an immature school-girl at a party of grown people is unusual, and the only celebrations which are considered of sufficient importance to distract her mind from studious pursuits are those domestic occasions when the immediate kins-people are present. A debut does not necessarily put an end to all grave and intellectual pursuits; but it opens the way for so much gayety that the barrier should not be removed until the mental development has reached a standard that cannot be lowered by the fascinations of the social world. A young girl, whose student life is broken in upon by social diversions that captivate her imagination and interfere with those processes which are indispensable to a well-balanced and active mentality, is not apt, when removed from the circle where her omissions and commissions are rated according to her immaturity, to reflect favorably upon the influences which have shaped her mind and manners; nor can it be expected that such an one will become the superior woman whose social graces are the evidence and the flower of a cultivated mind and a kindly heart.

No argument in favor of postponing the entree of a girl into society, until she has acquired the requisite training in all ways, is necessary for those wise women who are in the best and fullest sense brilliant society-women. There are, however, localities where no barrier, or at most but a slight one, exists between the social and student life of a young girl whose stature has carried her out of short frocks; and there are matrons whose indulgence leads them to overrule their own sense of what is fitting in favor of their daughter's desire for enjoying before their season the delights of social festivities. It is to such that a protest may be addressed. 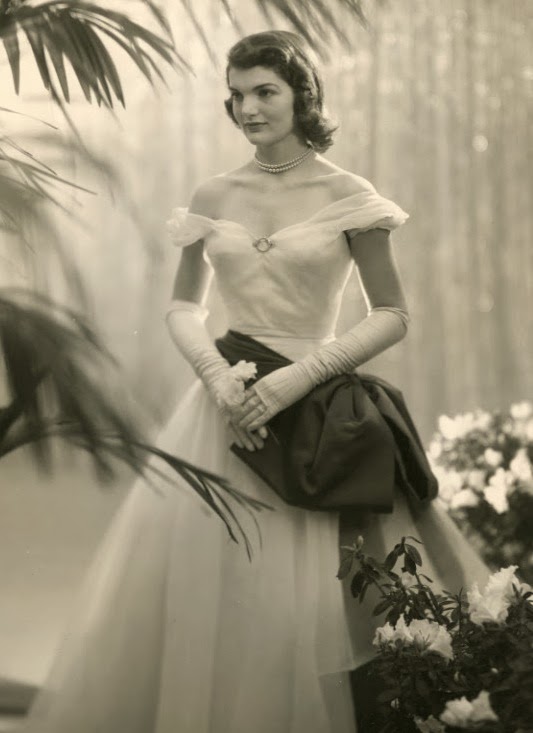 When Jacqueline Bouvier made her society debut in 1947, a Hearst columnist, Igor Cassini dubbed her the "debutante of the year." She would later reside in the White House, as the wife of President John F. Kennedy

A girl's formal presentation to society is rarely made before she is eighteen and sometimes not until she is nineteen or twenty. Previous to the date decided upon for the celebration her mother calls upon those of her acquaintance whom she desires to be present at her daughter's debut, and leaves her husband's card and, if she has grown-up sons, their cards also. The invitations which follow this preliminary are sent out about ten days or two weeks in advance of the date.

Young men usually decry for themselves the observances which mark the appearance of their sisters in the social world, and their status as members of society usually dates from their appearance at the semi-formal entertainments given by their parents, while their early popularity depends largely upon the effort they have made to be agreeable to the guests of their parents and the friends of their sisters. A young man who graciously does escort duty for his sisters needs no formal announcement of his eighteenth or twenty-first birthday to convince his acquaintance that he may with propriety be invited to participate in the social enjoyments suited to his kind. He may not desire them; indeed, he often shuns them, and it is this masculine shrinking from social intercourse with any but near friends or relatives, in connection with the demands of preparatory scholastic pursuits, college life or an early business training, which tend to defer his appearance in the capacity of a society-man considerably beyond the age when his sisters are launched upon the tide of social gayety.

It is customary, when a young man has completed his studies away from home or has been traveling abroad, for the ladies of his family to leave his cards with their own upon the members of their social circle at the beginning of the season, and this simple ceremony entitles him to the same formal consideration as the other members of his family in the matter of invitations, and involves the observance of a courteous recognition on his part. 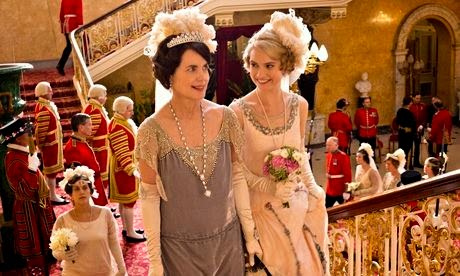 Young girls never wear a profusion of jewelry; debutantes often none at all, though a necklace or dog-collar of pearls is not inappropriate.

The toilette of a debutante is never elaborate. White is the favorite tint, and when her presentation is made at a ball or party, a diaphanous material is selected, tulle, *grenadine, *lisse, *mull, etc., being suitable. For an afternoon reception or tea she may also wear white, but veiling, fine cashmere, soft *surah and similar fabrics are more suitable than gauzy textures. If she have elder sisters, they may mark the difference in their social ages by wearing somewhat heavier white goods or delicate colored materials. Young girls never wear a profusion of jewelry; debutantes often none at all, though a necklace or dog-collar of pearls is not inappropriate. The dress should be of dancing length and simply made up. 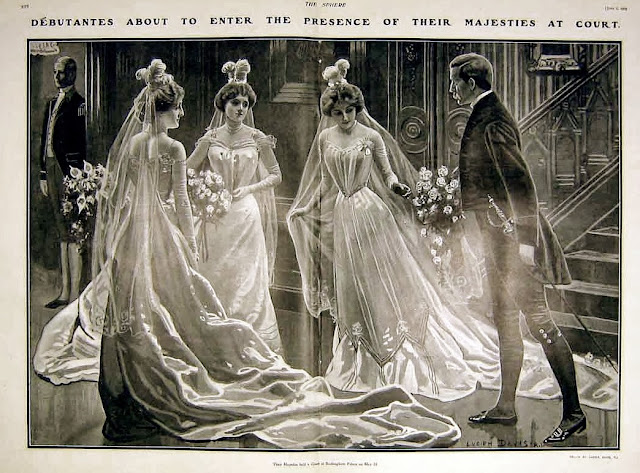 Debutantes Readying to Meet Royalty; To make one's “debut,” or to enter into society, has its roots in the Royal Court of France. By the reign of Britain's King George III (1760-1820), Queen Charlotte started a tradition of introducing and presenting the young aristocratic women of court to society. Known as "debutantes" from Queen Victoria's reign in 1837 and on, there was strict etiquette to follow regarding proper costume for court presentations; Fashionable evening dresses with head-dresses of veiling, feathers and a train trailing the dress from the waist. Long, white kid gloves, pretty fans or fragrant bouquets added to the look and offered a bit of diversity in look for the young debutantes.

The "Texas Dip" is a most extreme curtsey. It is performed by Texan debutantes when formally introduced at the International Debutante Ball in the Waldorf-Astoria. Young women slowly lower their foreheads to the floor by crossing their ankles, then bending their knees and sinking. An escort's hand is held by a debutante during the dip. When a debutante's head nears the floor, she turns her head sideways, averting the risk of soiling her dress with her lipstick or make-up.

The International Debutante Ball is an invitation-only formal debutante ball to present young ladies to high society. Founded in 1954, the ball is considered the most prestigious and the most exclusive debutante ball in the world. It occurs every two years at the Waldorf Astoria Hotel in New York City. Young women from around the globe and all over the United States are brought together at the ball and the surrounding parties with daughters of prominent politicians, diplomats, nobility, ambassadors. 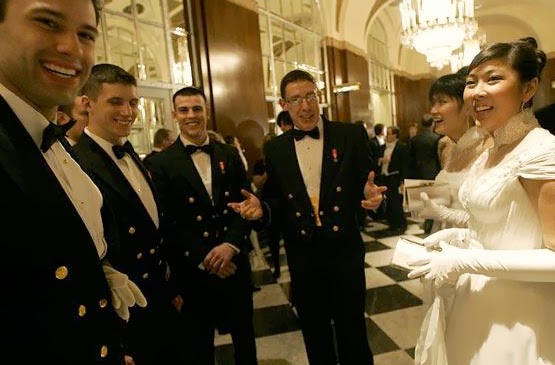 Debutantes with their military escorts

Over the years the International Debutante Ball has benefited numerous charities from the Ball's own foundation including the Soldiers’, Sailors’, Marines’, Coast Guard and Airmen’s Club of New York, which provides a home away from home for men and women of the United States Armed Services.

How to do the "Texas Dip" when being presented;
1. Face the audience & hand your bouquet to your escort.
2. Bring your arms forward, level with the floor.
3. Cross your ankles, spread your arms, and bend at the knees.
4. Sink gracefully to the ground while maintaining eye contact with the audience.
5. Lower your forehead to the floor, but avoid soiling your dress with your make-up. 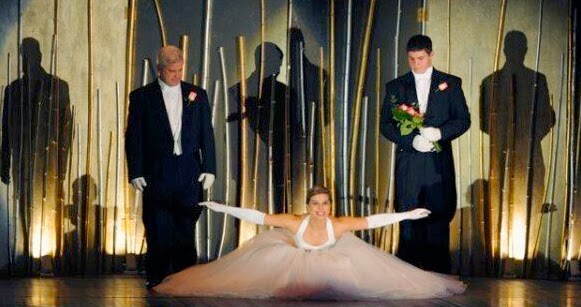 *Grenadine: A weave characterized by its light, open, gauze-like feel. It is produced on jacquard looms