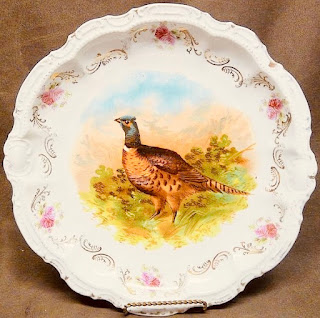 A typical 19th century “game plate.” – The “game course” was once a staple of fine dining and expensive sets of “game plates” were purchased by fastidious hosts and hostesses, to serve the game on to each of their dinner guests. In Gilded Age dining, after the roast course, the game course was next in order (if it was included, as it generally was in an elaborate dinner). Celery was the appropriate accompaniment of the game course. The salad was sometimes served with the game; otherwise it followed as a course by itself. According to gunsonpegs.com, the Pheasant Shooting season runs from the 1st October – 1st February in Great Britain, however in Northern Ireland the Pheasant Shooting season runs from the 1st October – 31st January.


There can be no doubt about pheasant being the favorite game dish of the Queen and Prince Philip, and when in season it appears repeatedly on the Royal menu. For this reason there is always a large number of pheasants stored in the giant deep-freeze, which the Queen had installed in the palace kitchens some years ago. Previous to this, selected game and fish were sent to several deep-freeze stores in London for the palace kitchens to draw upon when required.

In addition to pheasant, the Queen's chefs keep a healthy supply of game deep-frozen in readiness, as seen from this typical palace list:

At Balmoral and Sandringham the success of the hunting and shooting on the moors and fields always has a direct bearing on the main course for dinner which is why grouse, venison, pheasant and partridge appear in a variety of forms with great regularity. After the Court returned to London from Balmoral, the Royal family would also hold regular shooting parties in Windsor Great Park.

In the days of Edward VII there were lavish supplies of hot food for the Royal shooting parties, even though it was relatively simple by his standards. A typical picnic lunch might consist of mulligatawny soup and Scotch broth, stewed mutton, hashed venison, Irish stew and game pies. For dessert there would be plum pudding and apple tart. – From the book, “Dinner at Buckingham Palace”


Etiquette Enthusiast, Maura J Graber, is the Site Editor for the Etiquipedia© Etiquette Encyclopedia
Posted by Etiquipedia at 8:28 PM