French etiquette: “To kiss or not to kiss?” That is the question! 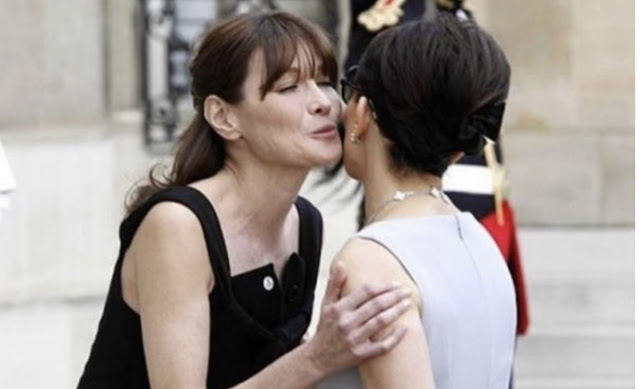 My online dictionary gives two definitions of la bise – “the icy blast of winter” and “a kiss”. Evelyn Waugh wrote of two society ladies in London, “They kissed with cold detestation.” Maybe that happens in Paris, but here in the Morvan there is nothing wintry about la bise.

Miss Graham, our headmistress in the 1950s, frowned upon what she called PDAs: public displays of affection. PDAs are ubiquitous here, in the form of kissing and vigorous handshaking and even hugging – in the street, in the doctor's waiting room, in the supermarket. Miss Graham would shudder, but when I meet Pierre and Nicole in Aldi, la bise as an expression of mutual respect and affection rules OK.

A little online research will lead you to items like To Kiss or Not to Kiss and Faire la Bise: The Art of the Parisian Double Air Kiss. All emphasize that la bise bears no relation to le baiser as immortalised by Rodin, or indeed to “French kissing”. In la bise, the kisses (for there should be at least two) are aimed at alternate cheeks. The online experts cannot seem to agree on which cheek gets the first bise. The thing they all agree about is that the lips doing the kissing remain closed. No slobbering – ça ne se fait pas. Strangely, nobody mentions the importance of holding one's breath while kissing – nobody wants your garlic fumes.

The number (from two to four or even, I am told, five in Corsica) depends less on the degree of affection or acquaintance than on the region. I even found a map of France on the web, showing the number of kisses current in each region. Someone probably got a Master's thesis out of that.

After almost eight years in the Morvan, I offer my own take on la bise. Here, men mostly shake hands with each other with optional back-slapping, but men kiss women. Women kiss women. Everyone kisses children: both sexes hold up their faces to be kissed. So our friend Alain from Auxerre shakes hands enthusiastically with my husband John, while I am treated to la bise. When you have known someone a while and exchanged handshakes, one of you will say, "On fait la bise?" and the kissing can begin.

My advice is go with the flow – and remember next time you meet that person. My extrovert friend Gigi delivers quadruple bises accompanied by a hug, whereas Simone, an equally dear friend but older and more reserved, does two, with no body contact. La bise says "hello" and "goodbye". My cleaning lady Yvonne and I exchange kisses when she arrives for work and again when she leaves.

Dionne Warwick sang: What do you get when you kiss a guy?
You get enough germs to catch pneumonia
After you do, he'll never phone ya
I'll never fall in love again.

In my experience, la bise does not spread contagion. To give an extreme example, the Bazolles oldies' club meets monthly and any woman with a birthday during that month faces what to many Brits would be Ordeal by Kissing. All 50 members claim their osculatory rights. If the lady is at all personable, several sprightly old buffers will queue up twice for the privilege. Amazingly, however, I have had just one cold since we arrived here in 2005. Maybe I had a natural immunity when we settled. My theory, however, is that the absence of mouth-to-mouth contact explains this. –By Rosy Rabson for Telegraph Weekly World, 2013


Etiquette Enthusiast, Maura J Graber is the Site Editor for the Etiquipedia© Etiquette Encyclopedia
Posted by Etiquipedia at 11:43 PM