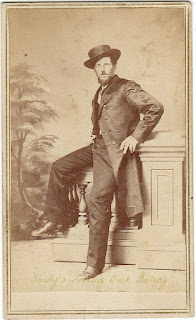 "No man or class of men has the power to set up or keep up any pre-conceived standards of right or wrong, of taste or etiquette... Not in Early California, that is!"

Men and Manners, or the Lack Thereof, in Early California


There is in California a practical freedom of speech and action, to be found nowhere in the Atlantic States. Men breathe freely and act as freely, caring, for no lookers-on. The reason is because society here has no leader, and will have none. The adventitious advantages of wealth, family, or profession, which at home enable their possessors to take the lead of the masses, are held at a discount which startles the newcomer. No man or class of men has the power to set up or keep up any pre-conceived standards of right or wrong, of taste or etiquette. The Californian takes a wild pleasure in kicking down the old-fashioned guide boards, so as to make sure of laying out a track for himself.


Wealthy men have their toad-eaters here, as well as elsewhere, but the largest possessions command no real respect among the minds of the people. They look upon riches as the very accident of accidents, as they are in this part of the world, and decline paying reverence to the man of wealth to-day, knowing that he may be "dead-broke" tomorrow, and the raggedest fellow in the crowd comes to play the millionaire in his place. Each one hopes to act the part in his turn, but looks upon the acquirement of wealth, after all, and only the accidental shifting of the colors of the kaleidoscope of existence. — Napa Reporter, 1859

Etiquette Enthusiast, Maura J Graber, is the Site Editor for the Etiquipedia© Etiquette Encyclopedia
Posted by Etiquipedia at 12:10 AM