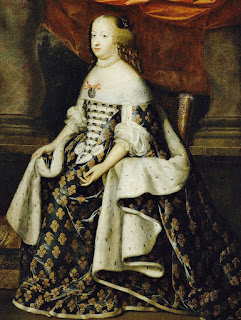 Maria Theresa of Spain's marriage in 1660 with King Louis XIV, was arranged with the purpose of ending the long-standing war between Spain and France. Famed for her virtue and piety, she sadly saw 5 of her 6 children die in early childhood. She is frequently regarded as an object of pity in historical accounts of her husband's reign. She had no choice, but to tolerate his many, many love affairs, and the rigid rules of etiquette at Versailles.

The bride of Louis XIV, having been thrown from her horse was dragged some distance before any Knight would risk his own life to save her, it being high treason to touch her ; and even after two, young Lords had devoted themselves, the Queen was obliged to entreat their pardon on her knees, in order to obviate the awful consequences of their generous act. — Daily Alta, 1855

Etiquette Enthusiast, Maura J Graber, is the Site Editor for the Etiquipedia© Etiquette Encyclopedia
Posted by Etiquipedia at 12:49 AM