Etiquette for Dining in Space

This is from an article appeared which was first published in 2012 on my personal blog. It is a tribute to all of those pioneering astronauts who inspired people the world over by going to the moon.

One of the classes that my etiquette students enjoy the most, is my class on Manners for Dining in Space.  Students, young and old, enjoy learning all about how astronauts eat now and especially how they ate very early on in space flights. I get to tell them about Alan Bean. He was the fourth man to walk on the moon, but the first man to eat spaghetti on the moon. Two big accomplishments in one trip! 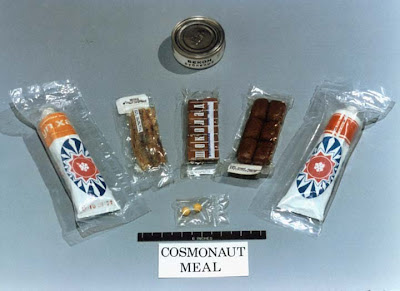 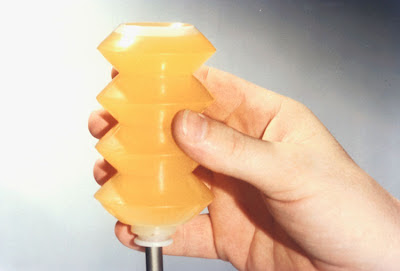 Ours weren’t much more appetizing, as this “Apollo beverage” shows. It looks like something one would hang on a hamster cage. The cereal below, in what Alan Bean called a “spoon bag” is unappetizing, to say the least. 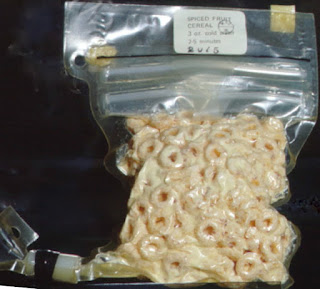 In July of 1969, Neil Armstrong and Buzz Aldrin walked on the moon. An amazing event that I can remember watching, like every other person with a television set, in wide-eyed wonder. What an achievement! My older brother was 14 at the time, and like most young boys of the day, was completely fascinated by the astronauts and their adventures into space and on the moon. In 2005, because of my brother's fascination with what we watched on our televisions that July in 1969, I got the rare chance to interview the late-Alan Bean. Bean was a retired USN Captain, former astronaut and one of a small group of American men who walked on the surface of the moon.

My brother Kevin, has long collected memorabilia of space exploration. When he found out that Bean was an artist, and created beautiful paintings based on his recollections of the moon and space, Kevin decided to buy one of his works of art. Not long after, Bean and most of the remaining living moon-walkers at the time, were going to be in Southern California for an event and invited my brother and his wife to join them all for lunch. My brother was over the moon to be meeting them all in person. 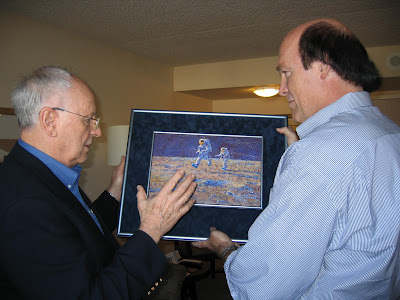 The late-Alan Bean (l) and my brother Kevin (r), discuss the painting. My brother was ‘over the moon’ to meet heroes from his youth.

About that time, I was researching dining customs and came across an article about eating in zero gravity. The next time my brother and I got together, I mentioned astronaut foods and how they have evolved. He asked, “Would you be interested in talking to an astronaut about what it was like? I can call Alan Bean and ask him if he would let you interview him.” I was thrilled. 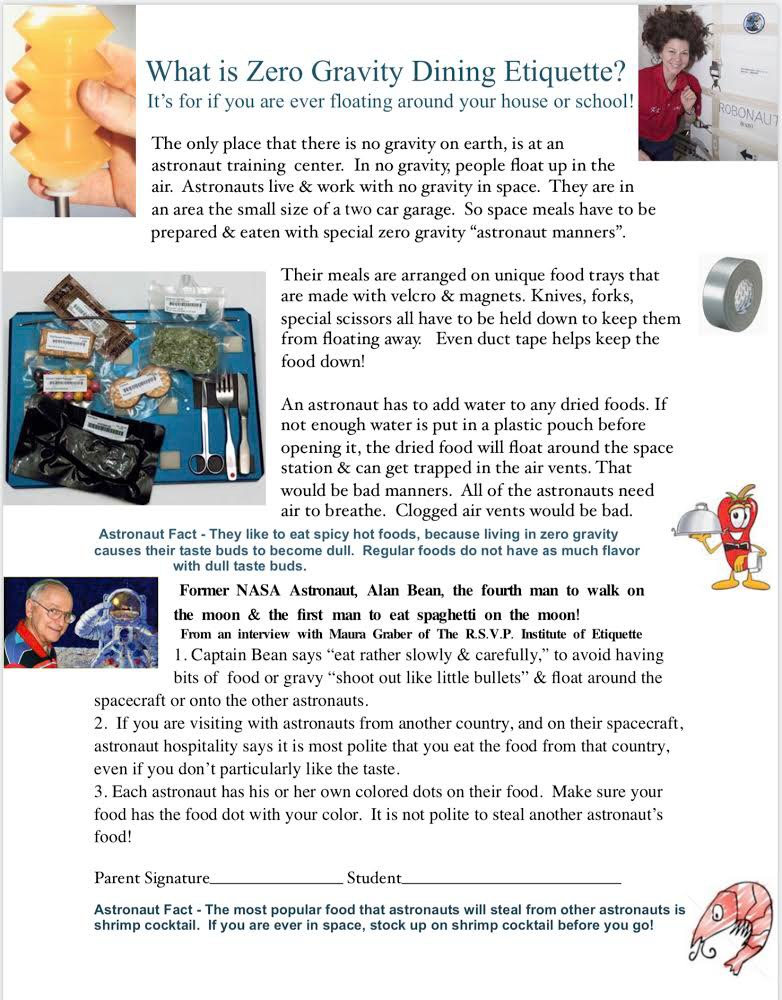 One of the handouts I give to students in classes is on dining in zero-gravity. Just in case they ever find themselves in space.

Alan Bean was charming in a telephone interview with me.  Charming and funny. I asked why being the first man to eat spaghetti on the moon was so important to him. (He said he wanted that achievement on his tombstone when he died.) He said that he had learned when he was in college, that spaghetti was inexpensive to eat, so he ate it every day. He came to love spaghetti, and was thrilled when the NASA nutritionists added spaghetti to the Apollo foods, though he did worry that Neil Armstrong or Buzz Aldrin would beat him to the punch and take it to eat first. Fortunately, they didn’t. But Bean wasn't wild about the taste, and he said it was a brownish color.

His favorite Apollo food was the chili and with good reason. Living in zero-gravity dulls one’s taste buds, so spicy food is good to have. He recalled one day “floating by” his space flight mates, and commenting that his shirt was perfectly clean. Their white T-shirts were a mess. They responded, that yes, they were a mess, but that it was chili, and he was the one that was eating chili. Bean said that the “spoon bags” that the chili and spaghetti were in, were a bit difficult. That one had to “eat rather slowly and carefully,” to avoid having bits of food or gravy “shoot out like little bullets” and ﬂoat around the spacecraft or onto the other astronauts. Their dirty T-shirts were the result of Bean eating his chili so fast! He admitted that if he was still an astronaut today, as they get to take some store bought foods with them into space now, he would bring as many ‘Fritos Scoops’ and cookies as they'd let him bring on board. – By Maura Graber, Site Editor of the Etiquipedia© Etiquette Encyclopedia and Director/Founder of the RSVP Institute of Etiquette