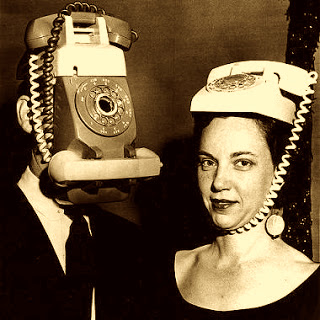 When there are several different persons using the same line, two or three of them may mistake the call for theirs, and all rush to the telephone at once. If at all stupid, or lacking in politeness, they will make it quite unpleasant for each other. - From "Practical Etiquette," 1899
While it is fun to read retro-etiquette or vintage etiquette posts, which preceded our carrying our phones everywhere with us,  they rarely need much modification to suit today's needs.  Keep this in mind when reading. With mobile phones, or cell phones, fewer people are making actual phone calls. Texting and engagement through social media sites are far more prevalent.
The amount of text, email and social media app data usage, surpassed the amount of voice data used in cell phone calls in less than a decade. One 40-year-old marketing consultant from Canton Massachusetts, said that she probably only spoke to someone verbally on her cell phone, once a week, when interviewed by the New York Times in 2010. To get, and keep jobs, in which conversation skills are highly valued, proper telephone manners may have to be learned, or refreshed, as the current trends continue.

For the benefit of those who but seldom make use of the telephone, and consequently feel more or less ill at ease when attempting to use one, and also for those who, from ignorance of the first laws of politeness, or who, from thoughtlessness, ignore them, a few hints upon the subject may not come amiss. It is after having called up “Central,” and been given the number requested, that one often stands in need of no small amount of tact and good breeding, as well as of some idea of the best method of procedure.

When there are several different persons using the same line, two or three of them may mistake the call for theirs, and all rush to the telephone at once. If at all stupid, or lacking in politeness, they will make it quite unpleasant for each other. The one entitled to speak should politely inquire for the one for whom she has called at the telephone, also giving her own name as the one delivering the message. If this does not suffice to enlighten those who sometimes keep calling “hello,” “hello,” without waiting to learn if they are the ones desired, the one talking should again announce herself, and the name of the one to whom she wishes to speak. Then, occasionally, even while in the midst of a conversation, some one will break in with a “Hello!” “Who is it?” “What do you want?” etc., which is quite distracting. If one can gain a hearing in no other way, it is well to say: “Excuse me, I hold the line.” If this does not bring order out of chaos, one should ring off and call again.

One should be careful not to call up friends at inconvenient hours, and when one is notified by a servant, or otherwise, that someone, the name being given, is at the telephone wishing to speak with her, she should certainly be as expeditious as possible in replying; for, by holding the wire, she is inconveniencing others, as well as the one who is waiting for her. No lady needs to be warned against speaking discourteously under any circumstances to the telephone assistants at the central office. It is in these little things that one shows herself to be well-bred or not.

None, of course, but the most informal of invitations can be delivered by telephone.

Servants should be taught always to answer the telephone politely and intelligently. When answering, a servant should say whose residence it is, if asked, not by giving the family name, as “Smith,” but as “Mr. Smith,” and then, if asked who is at the instrument, she should reply, “Mrs. Smith’s cook” or “maid.”

One’s individual manners, and ordinary polite or impolite forms of address, are very noticeable when accentuated by the telephone. — From Practical Etiquette

Etiquette Enthusiast, Maura J. Graber, is the Site Editor for the Etiquipedia© Etiquette Encyclopedia
Posted by Etiquipedia at 11:39 PM