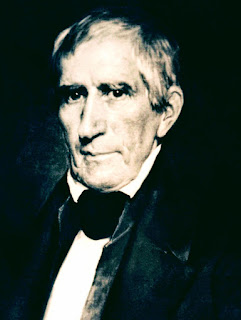 William Henry Harrison was the 9th President of the United States. The last president born as a British subject, Harrison died of pneumonia merely 31 days into his term, thereby serving the shortest tenure in United States presidential history. He was the first president to die in office. Harrison's death briefly sparked a constitutional crisis, leaving unsettled Constitutional questions as to the presidential line of succession.

If we could be carried back into the 18th century we should behold a country totally unfamiliar to us, and the material transformation which the progress of a hundred years has wrought, but measures a corresponding change in the national attitude. Though only the Chief Magistrate of a Government which was viewed with scant respect abroad, and composed of a few factious states that offered many intricate puzzles in statecraft, and sharply checked any extension of the executives power, nevertheless the Republican Court was hedged in by much more formality than is now permitted, to rule the White House.


Were we to apply the principle of evolution to social forms, we could see how well they have been demonstrated in the changes wrought in the etiquette of the Federal Capital. Washington's attendance, upon Congress in a cream-colored coach, drawn by six white horses, with outriders and postilions, escorted by the Secretary of State and the Secretary of the Treasury, savored of Kingly state. His receptions were chillingly formal, but in strict accordance with his sense of Presidential propriety, which forbade the ceremonial of hand-shaking as too familiar. England's yoke had been thrown off, but her influence was still apparent in the aristocratic tinge of society and the imitation of her form.

As the notion of the Republic has been developed, these remaining traces of Royal ceremonies have disappeared, until now. President Harrison steps from the ranks of private citizenship into the executive chair of a nation great in extent and influence without any essential change in the etiquette of his intercourse with his fellow-citizens, and now Americans see nothing derogatory to the indignity of the high position when our President serves his guests to refreshments or assists them in the cloakroom.

These changes have deep seated causes. The cheers which will re-echo for President Harrison on his progress to New York will have a widely different keynote from those that greeted Washington. The pulse of the nation, then struggling to its feet, beat high with hope and with fear for their new Government. Under the Confederation, the United States were hopelessly drifting toward anarchy, and the terrors of the French revolution filled American elites with forebodings for their own future.

The Federal Government seemed to offer a remedy, but might not the President become an absolute Monarch, and the Senate arrogate to itself aristocratic privileges and relentlessly crush the liberty of the States. Thus it was that a deep undercurrent of anxious emotion surged through the hearts of the citizens who greeted Washington, while the cheers which will resound for Harrison as he follows in his predecessor's footsteps will arise from hearts full of proud satisfaction in their President, and trusting with perfect confidence in the form of Government that has so well stood the test of the century, and under which the country has achieved such unparalleled progress. — Pacific Rural Press, 1889

Etiquette Enthusiast, Maura J Graber, is the Site Editor for the Etiquipedia© Etiquette Encyclopedia
Posted by Etiquipedia at 4:04 PM