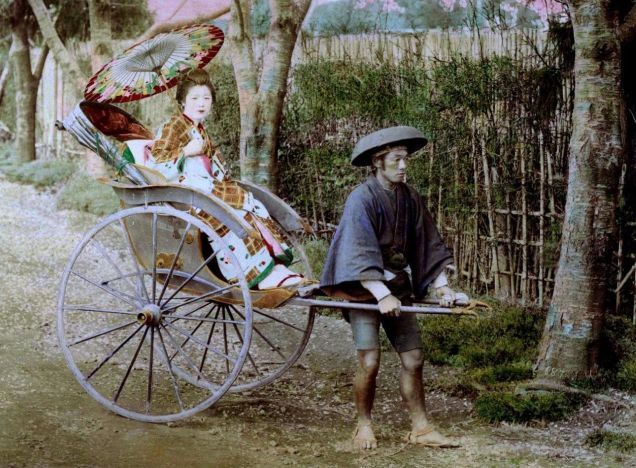 A recent visitor to Japan says that there has existed in Japan for many centuries a curious law to the effect that whenever the Emperor or Empress appeared in public no other person should seem to occupy a higher place than this member of the royal family; therefore, on such occasions the shutters of all upper stories were drawn and the upper parts of the houses through which the royal party moved, were seemingly deserted.

The Law Is Still In Effect

Three months ago, when the Empress went into the country for a brief period, an elaborate announcement was posted in conspicuous places along the line of her contemplated route commanding the public to observe strictly certain requirements of etiquette, to wit:

When her Majesty shall past along no one must look at her from the frame built on houses for the drying of clothes, or through cracks in doors, or from any position in the upper part of their houses.

If anybody wishes to see her Majesty, he or she must sit down at the side at the road by which her Majesty will pass.

All children must be taken particular care of that they do not play in the road and so obstruct the passage of her Majesty through the streets.

No one must look at her Majesty without taking off his hat, in neck-cloth or turban, or whatever else be may be wearing on his head.

Moreover, no one must be smoking while he or she is looking at her Majesty, nor must anyone carry a stick or cane.

Only women wearing the clothes of foreigners will be permitted to retain their head-covering.

Although it may rain, no person will be allowed to put up an umbrella while her Majesty maybe passing.

Dogs must not be allowed to wander on the road by which her Majesty will pass.

As her Majesty passes, no one must raise his voice, nor must any sound be heard, nor must the crowd close in and follow her carriage, for no noise must be made.

When her Majesty reaches Umeda Station there will be a discharge of fifty fire-works. — New Orleans' Picayune, 1890

Etiquette Enthusiast, Maura J Graber, is the Site Editor for the Etiquipedia© Etiquette Encyclopedia
Posted by Etiquipedia at 2:12 AM