or...
Will the Real First Lady Please Stand Up?

The wife of the chief-justice, and not the wife of the President, is the first lady in the land, and takes precedence of all others. She holds receptions and receives calls, but she alone is excluded from all duty of returning calls.

The life of a lady in society at Washington is exceedingly onerous, and more especially so if she be the wife of any official. Next in rank comes the wife of the President.


SOCIAL DUTIES OF THE PRESIDENT

It is made the duty of the President to give several state dinners and official receptions during each session of Congress. Besides these, there are the general receptions, at which time the White House is open to the public and every citizen of the United States has a recognized right to pay his respects to the President.

On the days of the regular " levees " the doors of the White House are thrown open, and the world is indiscriminately invited to enter them. No "court" dress is required to make one presentable at this republican court, but every one dresses according to his or her own means, taste or fancy. The fashionable carriage- or walking-dress is seen side by side with the uncouth homespun and homemade of the backwoodsman and his wife.

From "The Ladies' and Gentlemen's Etiquette- A Complete Manual of the Manners and Dress of American Society E. B. Duffey ~ 1877

DINING AT THE WHITE HOUSE

DURING THE HAYES ADMINISTRATION

At these affairs, a balance between men and women was maintained. Upon arrival, guests gathered in the East Room where the gentleman received an envelope containing the name of his dinner partner. At 7:00 P.M., the President and First Lady appeared. They led a double procession from the Red Parlor into the dining room.
During Hayes’ term in office, state dinners were served a la Russe - in the Russian style of bringing prepared plates and bowls from a separate serving area. No food or serving dishes appeared on the table to detract from the elaborate centerpieces, candlesticks, etc. Because Lucy was fond of fresh flowers, bouquets from the White House Conservatory were prominent on the tables. Each guest chose between two offerings for each course. The multi-course dinners could last up to three hours. Following dinner, Lucy was fond of leading guests into the conservatory.

Dinner with the Hayes Family

The Hayeses entertained close to 400 guests at formal and informal dinners during their four years at the White House. Cabinet members, politicians - friend and foe alike - intellectuals, literary figures, and military officers were frequent guests. Fellow Ohioans, Congressmen William McKinley and James A Garfield, were the Hayeses most frequent guests. Future president William McKinley, Hayes’ close friend and Civil War comrade, attended dinner 17 times while Garfield enjoyed dinner at the White House eleven times
.
Even though the First Lady had the social obligations of her "office," she had no hired staff. Lucy Webb Hayes invited nieces, cousins, and the daughters of friends to stay at the White House. The young ladies assisted as hostesses, attending state dinners, Lucy’s Tuesday evening levees, and Saturday receptions. Everyone benefited from the arrangement: Lucy had help with her entertaining, and the young ladies enjoyed Washington society. The letters of Lucy Scott West, penned during her stay at the White House, offer a rare, first-hand glimpse into White House social events during the Hayes Administration.
From The Rutherford B. Hayes Presidential Center 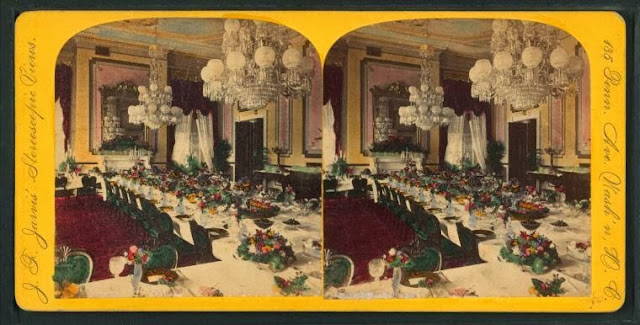 The following is a newspaper account of a luncheon held by Mrs. Hayes for fifty young ladies:
Mrs. Hayes Lunch Party
State Dining Room in the White House
(Extracts from Philadelphia Times)

The young ladies visiting Mrs. Hayes, Miss Morgan of New York; Miss Mills of San Francisco; Miss Russell of New York; Miss Scott of New Orleans; Miss Devens of Boston; and Miss Herron of Cincinnati, have had much done for their entertainment during their visit. To day Mrs. Hayes gave a lunch party in their honor at 2 P.M. In the state dining room. Over fifty young ladies were present, and no married lady except Mrs. Hayes. In addition to the guests staying in the house, there was Chief Justice Waite's daughter; Justice Harlan's daughter and her friend, Miss Butler, Justice Bradley's daughter; Justice Miller's daughter, Ex-Justice Strong's daughter; Miss Lucy Work, who is a guest of Judge Swayne's family; the daughters of of Senators Carpenter, Bayard, Kernan, Pendleton, Randolph, Bailey, Edmonds and Vorhees, Speaker Randall's daughter, General Le Duc's daughter, Admiral Porter's daughter, Surgeon General Barnes' daughter, General Sherman's youngest daughter, two of Secretary Evart's daughters, Secretary Shurze's two daughters, British Ministers two daughters, the daughters of the Chilean, Spanish and Portuguese Ministers; Miss de Chambrun, the great-grand-daughter of General Lafayette; Miss Devans, the Attorney General's niece; Miss Bartlett, the daughter of the Secretary of the Chinese Legation; Miss Davenport and Miss Scovil, the guests of Representative Claflin s wife; the daughters of Representatives Loring and Norcross of Massachusetts; Miss Freeman, daughter of the late Colonel Freeman, whose family are so well known in Pennsylvania; Miss McCulloch the daughter of the Ex- Secretary of the Treasury; Professor Baird's daughter; Miss Scott, whose father is stationed at the Arsenal; Miss Pattison, whose father is in command at the Washington Navy Yard; Miss Stone, the sister in-law of Assistant Secretary of State John Hay, and her friend Miss Mather; Miss Haymaker, the guest of Mrs. Senator Nathan P. Hill of Colorado; and Miss Taylor; Miss Porter of this city.

As the State dining table seats only from thirty six to forty, it was extended by long tables reaching nearly across the room place that right angles with it at each end. Mrs. Hayes sat at the end of the room, and it the other opposite and Miss Russell of New York. The other young ladies staying in the house were dispersed among the guests. No gentleman were present. The table was exquisitely adorned with flowers and dishes of fresh and candied fruits, candelabra, etc. Potted plants were also grouped about the room. The plants and ferns in the conservatory were seen to great advantage through the long windows. A photograph was taken off the table, by Jarvis, the Washington View Photographer. The dinner cards were perfectly plain, square, white cards, with a silver edge and the coat-of-arms of the United States upon them. From the list of guests it will be noticed that nearly all the classes of officials ever seen in Washington society were represented- the Supreme Court, both Houses of Congress, the Cabinet and Diplomatic Corps, and also some private citizens. –Miss Grundy 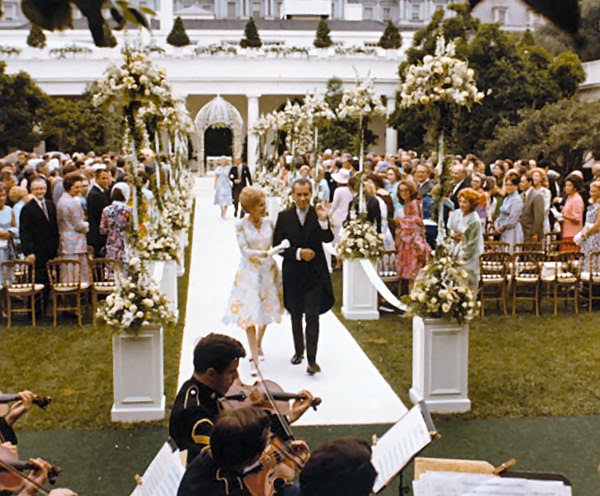 "What's in a name? That which we call a rose by any other name would smell as sweet." - William Shakespeare... President and First Lady Nixon in the recessional of the 1971 wedding of Tricia Nixon and Edward Cox


"I applaud the wives of our Presidents. They do wonderful work for the people of our country. They are to be commended for simply helping their spouses through the grueling hours and painful intrusions into their most private lives. However, the First Lady (an honorary title, by the way) was always the spouse of the Chief Justice of the Supreme Court, as those on the Supreme Court have their jobs until they die, or retire, if they so choose. They are the only such lifetime jobs our government offers. The Presidency was, and still is, simply a "temp job".

Writers of etiquette books, and those in Washington society, were horrified in 1877 when journalist Mary C. Ames referred to Lucy Webb Hayes as "the First Lady of the Land". Prior to Ms. Ames pilfering the "First Lady" title for her article, no references to wives of the President were anything but just that; The wife of the President. Aside from the fact that Washingtonian etiquette prescribed the social duties involved in being a First Lady at that time, and the Supreme Court Justices wives took their duties very seriously, many wives of Presidents were not all too happy that their husbands were running for the office. Some wives were very content to stay in their homes, close by to their friends, and they did not wish to pull up stakes for a move to Washington.

Take Anna Harrison for example. She was 66 years old when her husband William Henry Harrison was elected President. She loved her home was not too keen on moving. She had bore many children, and six had died over the years prior to her husband winning the Presidency. She had no political or social agenda, or desires. She is often quoted as saying, "I wish that my husband's friends had left him where he is, happy and contented in retirement." She skipped the festivities in Washington after her husband's win, and decided to wait until after his inauguration to move to Washington. She missed his record breaking inaugural speech in the freezing Washington air. Six weeks into his term, Harrison died from pneumonia and pleurisy. Anna received the news as she was packing to move to Washington D.C."
-From Maura Graber, Etiquette Sleuth

"The closing months of President Hayes' administration were marked by national good feeling and cordiality, and the social life of the White House was most brilliant. Dinner parties and invitation receptions followed each other in rapid succession, and the guests that were entertained there were great in numbers. The extent of her hospitality was estimated by ladies whose husbands had official relations with the President, and who by right of their positions were often at the White House entertainments, as being greater than any other hostess who had preceded her in her high position. She never gave a dinner or an evening party that was not on a scale of elegance compatible with her position, and hence only praise can be said of her administration."
—From "The Ladies of the White House, Or, In the Home of the Presidents: Being a Complete History of the Social and Domestic Lives of the Presidents from Washington to the Present Time" By Laura Carter Holloway, 1881

Posted by Etiquipedia at 8:56 PM