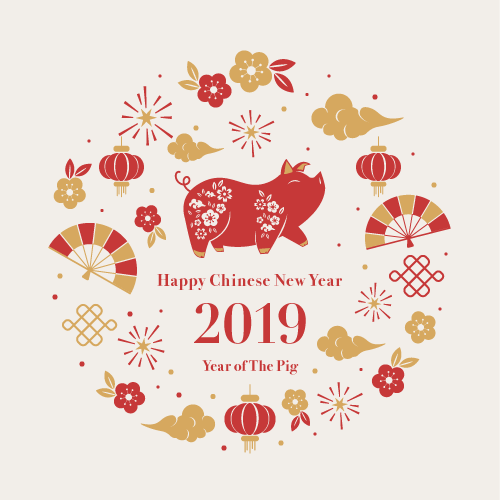 The Pig is the twelfth of all zodiac animals. According to one myth, the Jade Emperor said the order would be decided by the order in which they arrived to his party. Pig was late because he overslept. Another story says that a wolf destroyed his house. He had to rebuild his home before he could set off. When he arrived, he was the last one and could only take twelfth place. – From Chinesenewyear.net


In China, the Spring Festival or Lunar New Year, is the celebration of the new year determined by the lunar calendar, because the dates of celebration follow the phases of the moon. Since the mid-1990s people in China have been given seven consecutive days off work during the Chinese New Year. This week of relaxation has been designated the “Spring Festival.”

It’s not only the Chinese who observe and celebrate the Lunar New Year. In China, Vietnam and in Chinese communities around the world, annual 15-day festivals are celebrated. These begin with the new moon that occurs sometime between January 21 and February 20 according to Western calendars. Festivities last until the following full moon.

Etiquette Enthusiast, Maura J Graber, is the Site Editor for the Etiquipedia© Etiquette Encyclopedia
Posted by Etiquipedia at 11:28 PM