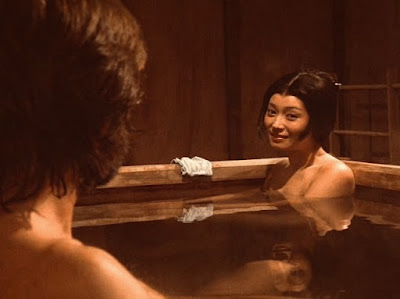 In the 1980 historical miniseries, Shogun, John Blackthorn, self-conciously bathing with Mariko, is the first English person to arrive in Japan and must find a way to survive in a culture which considers him to be a barbarian due to his European habits (eating the meat of birds he has killed, eating with one’s hands and rarely bathing.)– photo source Pinterest

It is said that “it is conscience that makes cowards of us all,” and there is much talk ot the “whisperings or conscience,” the “wee small voice” and all that; but whence comes that voice? Is there an immutable principal of right and wrong placed somewhere in the mind that tells one of right and wrong? Or is, it not custom —that to which we have been accustomed? A writer in the New York Sun says that travelers in Japan tell of the unconcern with which a Japanese will take a bath in full publicity, and the custom has impressed foreigners as immodest.

An Englishman who has been long in the country says there is really nothing immodest in the promiscuous bathing of men, women and children from a Japanese point of view. With them, cleanliness is the object sought for, and the etiquette of the bathroom differs from the etiquette of the parlor. With Europeans, he says, the attitude of waltzers is only permitted when the music is played. It is something like this with the Japanese bathers. When the necessary operation of washing or doing other work requires it, to strip becomes a duty.

On the other hand, a Japanese woman would scorn to appear decollete. To her eye, our ballrooms are an astonishment, and the exposure of the person for display is incomprehensible. This writer thinks that the Japanese are not excelled by their Western brethren in modesty.– Weekly Colusa Sun, 1892

Etiquette Enthusiast, Maura J Graber, is the Site Editor for the Etiquipedia© Etiquette Encyclopedia
Posted by Etiquipedia at 9:04 PM