Etiquette and Creation of Modern State Banquets in Great Britain


The Royal Household staff start laying the table for a banquet two days before the event, although preparations will have been underway for days before this. One of the most striking elements on the banqueting table is the magnificent service of silver gilt. It comprises not only the dining place itself, but also decorative items such as dessert stands and centerpieces. Numbering over 4,000 pieces, the service was commissioned by George IV when he was Prince of Wales, and it was supplied by the Royal goldsmiths Rundell, Bridge and Rundell.

At a famous dinner held at Carlton House in 1811, the Prince sat against a backdrop of silver guilt  at the head of a table that stretched the entire length of the building. Along the centre of the table was running stream of water with banks of moss and aquatic flowers, cascading from a waterfall and falling into a series of pools at the foot of the table. Real fish swam in the stream. In this contemporary caricature (below), the fish are disconcerting the guests by staring at them.
The Grand Service includes 14 tureens, 20 sauce tureens, 140 dishes, 288 dinner plates, 118 salts, 12 ice pails, 12 mirrored plateaux, 58 desert stands and centerpieces and  107 candelabra.  Unlike a modern dinner service, it has no single style of decoration. The goldsmiths of the day were influenced by Greek, Roman, Egyptian and other styles.

Originally some parts of the service for plain silver, although items intended for the desert course we're always gilt. However, George IV gradually ordered every piece to be gilded. This may have been because of the impression gained by one visitor to a ball at Carton House in n 1814: "All was in gold or silver gilt which made the silver plate, set out in the deep recessed windows, look cold and poor, although in reality it was very massive and handsome."

Today the Grand Service is kept under the care of the "Yeoman of the Silver Pantry." When not in use, it is kept in a controlled atmosphere. For a State Banquet it must be at its most gleaming and every piece is taken apart, thoroughly washed and cleaned with soft brushes, then dried and polished with soft cloths before being placed on the table. When everything is dismantled, there are over 8,000 components to clean. It takes 8 people 3 weeks to prepare.The Grand Service provides cutlery for every course and includes more obscure items like marrow scoops, ice spades and olive spoons. Today over 2000 pieces of cutlery are needed to serve and eat the banquet all drawn from the Grand Service.

The Queen's table is always decorated in the most magnificent style. She and her most important guest are usually flanked by the grandest pair of candelabra in the service -- which stand at 1.25 metres (4 ft) tall. These were designed by the sculptor John Flaxman and relate episodes from myths of Bacchus and Mercury. The Queen uses a salt that is not part of the Grand Service but was made much earlier, in 1721, by Nicholas Clausen.

At Windsor, on the single long table, a candelabrum portraying St. George and the Dragon is used -- this stands even taller at almost 1.5 metres (5 ft.)  This huge piece was William IV's contribution to the elder brother's dinner service -- a final addition to the grandeur that has served every monarch since George IV. 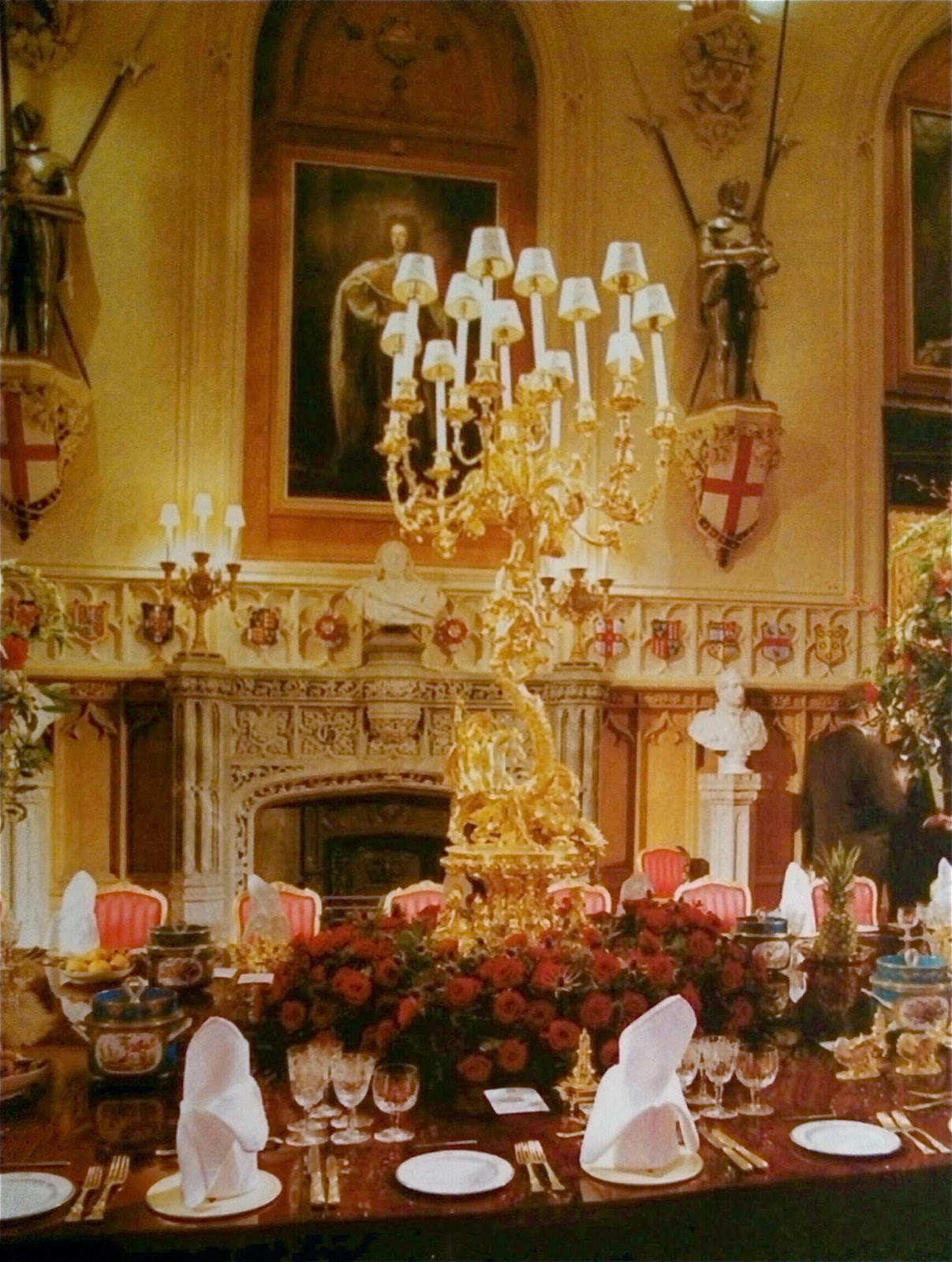 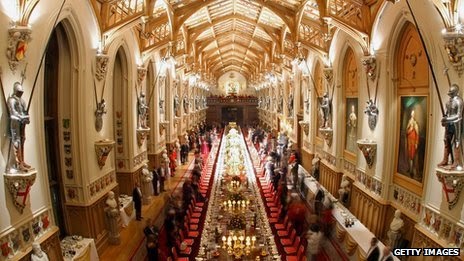 The Etiquette at the Table:

At the dining table, don't start eating until the The Queen has started her meal.

When it comes to utensils, start at the outside (with the outermost spoon or fork) and work in. If you drop something, don't make a fuss - servants will spot it and deal with it.

Watch for clues and cues with regard to how to properly use your utensils.  Let others who have been there before, guide your actions.

Don't think about asking the Queen to "Please pass the salt."  She has her own salt dip, or salt cellar.

When she has finished her course and stops eating, you have finished your course, too.

Asking for seconds is never allowed, as is asking to be excused to use the restroom facilities.

Sources; BBC News, The Royal Collection and "For the Royal Table: Dining at the Palace"
Etiquette Enthusiast, Maura J Graber, is the Site Editor for the Etiquipedia© Etiquette Encyclopedia
Posted by Etiquipedia at 12:19 AM