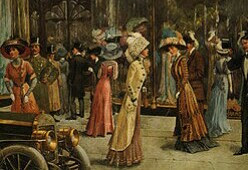 Depiction of Harrod's in the 19th Century — Royal tradition ended in 2000, with the removal of royal warrants, and after the death of Princess Diana. Harrods severed its commercial links with the Royal Family by removing warrants from its prestigious shopfront. Workmen have taken down the warrants, which show that the Royals buy goods from the store, from outside the Knightsbridge building. The Royal seal of approval was also removed from the store's vans, marking the end of a 62-year tradition.

Poor Queen - She Can Take Only One Shopping Trip Every Year!

LONDON (UPI)—Queen Elizabeth II likes to have what she calls “a really good poke” 'round everything on the one time a year when she goes shopping—for Christmas presents. Court etiquette prevents her from going out to buy anything except Christmas gifts. Everything else is sent to the palace for her to choose from. So the Queen always looks forward eagerly to her annual expedition to a famous store (Harrods) in the London district of Knightsbridge, near Buckingham Palace, for the pleasure in which other women take as a matter of course.

She writes her gift list weeks in advance, makes secret inquiries as to tastes, and adds Prince Phillip's gifts to her own. Her Lady-in-Waiting telephones the store manager to say when she is arriving. “No publicity, please,” is the strict rule. One Christmas the newspapers described the toys the Queen had bought. Her eldest children, Prince Charles and Princess Anne, discovered what they were to receive three weeks in advance. This year the queen has a special gift for them.

She is having a “teen-age rumpus room” made in the Victoria Tower of Windsor Castle, which the royal family uses as a weekend home. The sound-proof room will have television, hi-fi equipment, a tape recorder and rugs that can be removed for dancing sessions. It is due to be inaugurated formally with a teen-age cocktail party when Prince Charles, 16 and Princess Anne 14, arrive home for the holidays from Gordonstoun and Benenden Schools, respectively. Normally the Queen has a big house party at her country home at Sandringham during Christmas but this year renovations are in process there, so the royal family will spend Christmas at Windsor.

It is celebrated in the traditional English manner, with a Yule log burning in the hearth and the rooms decorated with holly, mistletoe and pale Christmas roses. Dinner is the same every year —roast turkey with sausages and chestnut stuffing, sprouts and carrots, followed by hot mince pie and plum filled Christmas pudding. There's fruit, candy and crackers, which are pulled. The hats they contain are put on by everybody. The Christmas dinner is served at 1:00 p.m. instead of in the evening, so all the children over seven can be present. Those under that age eat upstairs in the nursery suite, but come down during the afternoon for the children’s party.

The brilliantly decorated and illuminated Christinas tree is ceremoniously revealed at dusk in the ballroom when the double doors are flung open. There is a gift from everyone in the building. The Queen distributes the packages, such things as socks or china for her staff and servants, puzzles and jokes for the royal family. They exchange their personal gifts on Christmas Eve, just before carol singers come into the hall to sing the Christmas hymns. The Queen and all the Royal family join in. On Christmas morning, everyone attends church and Prince Philip customarily reads the Scripture lesson. – The Desert Sun, December 1964


Etiquette Enthusiast, Maura J Graber, is the Site Editor for the Etiquipedia© Etiquette Encyclopedia
Posted by Etiquipedia at 3:22 PM