Profiles in Fashion— C.F. Worth 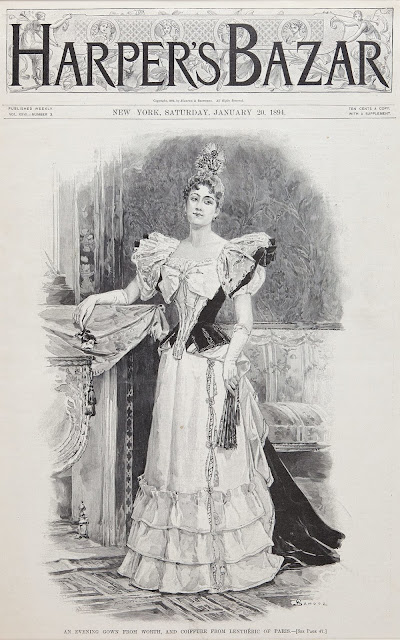 A Worth gown depicted on the cover of Harper’s Bazar, in 1894— According to the Telegraph, Charles Frederick Worth was the
“the Lincolnshire lad who became Queen Victoria's favourite couturier.”

Charles Frederick Worth, the first couturier of this age, and whose death in Paris has been the subject of much remark the world over, was buried recently in the family vault in the village of Suresnes-sur-Seine. On the Wednesday previous a service for the dead was held in the French Protestant Church in the Avenue, de la Grande Armee, Paris. Mr. Worth came to Paris as a young man of 20, the son of a Lincolnshire solicitor, looking out for something to do in the costume way, he having been with Swan & Edgar in London for seven years, and with the sincere determination to carve out for himself an independent fortune. It is not true, as Le Temps rather cruelly suggests, that the youth was of so artistic a temperament that he found England out of harmony with his tastes and feelings, and naturally gravitated to the one city of light and beauty. Young Worth simply emigrated, took the first situation in Paris that looked promising (it was with Gagelins), and threw into his occupation all that AngloSaxon energy which in those days of lesser competition with his own countrymen would assure him ultimate success.

To be candid, Worth did indeed leave England at a disparately inartistic period. It was the days of high stocks for men, poke-bonnets for women and crooked-leg furniture with horsehair. Nothing could be more dreadful. But young Mr. Worth heeded these things not. He came to the city where many of his countrymen have since made their fortune at just the right epoch. “Miss Flora Mc Flimsey of Madison Square” and all her friends, who found in Broadway nothing good enough to wear, were coming over to Europe to learn how to dress and going to Paris for the latest fashions. Mr. Worth saw all this and knew where his fortune lay. Soon after he had learned his business he suggested certain enterprising movements in advance to the house in which he was employed. They hesitated and eventually declined to accept his suggestions, whereupon Mr. Worth left their employ and started a business for himself in the very same premises in the Rue de la Paix in which the business is conducted to-day.
His life is a contradiction to the axiom that “small beginnings are the way to get on.” Mr. Worth founded a business that from its birth was able to compete with, if not outshine, all his competitors. At the time of his death the house was sending out 10,000 costumes a year, and with every prospect of more. His sons, MM. Jean and Gaston, have now the entire control of the concern, though until very recently Mr. Worth superintended all the details of purchase. In private life Mr. Worth was almost a recluse. He married early a French lady, settled down in a small villa at Suresnes, adjoining the railway station, and used the daily train to go to his business. This villa soon became too small. He added to it ground and thereon built additions; then more ground and more buildings. He had reached from the main road to a public footpath and progress was arrested. Not for long.
Over the footpath he threw an arch, on the arch continued his building, bought enough land on the other side the path for all his stables, greenhouses and vegetable gardens and another villa and grounds for one of his sons, so that to-day this conglomerate mass of buildings in a dozen styles of architecture forms the immense Chateau Worth, embracing several acres of exquisite grounds. The interiors of the buildings are like the exterior, full of surprises. Staircases greet you everywhere, as the houses are grouped all on the side of a steep hill, and the levels have to be met by stairways. The ceilings are low or high, just as it happens, but all adding to its picturesqueness. The walls are covered with ceramic decorations: plates and pieces of ware of Nantes, of Nevers, of Rouen, of Niderviller, Strassbonrg, Blois, Moustiers, Limoges, Marseilles, Sceaux, Tours, and especially old Quimper grouped there by the hundred. A most interesting place, but little known to the outside world.
Some years ago I asked Mr. Worth to allow me to photograph his grounds and give a published description of his home. He replied most modestly and firmly : “I am a business man and shall always remain one. Were I to accede to your wish I might pose as something else, and this I have no wish to do.” Charitable in a large way locally, for at Suresnes he was to the poor most bountiful and to a few other charities, he never identified himself with the English colony of Paris, was rarely seen in public, except at the village celebrations of Suresnes, where he was greatly beloved, and on which occasions his purse was always  open. Among commercial men of the nineteenth century few, if any, have known so steady a rise to prosperity entirely through their own industry, perseverance and intelligence as the late Charles Frederick Worth.— Queen, 1895

Etiquette Enthusiast, Maura J Graber, is the Site Editor for the Etiquipedia©️ Etiquette Encyclopedia
Posted by Etiquipedia at 11:46 PM