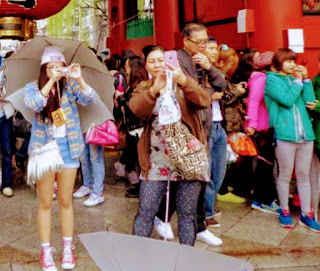 In many ways, Thai and Japanese societies are similar, with sophisticated rules of etiquette and many shared cultural affinities...

In 2014, the Thai embassy released a "do’s and don’ts" list for Thai tourists when visiting Japan — Here is the list below:

BANGKOK – The Thai Embassy in Japan has some tips for Thai visitors: Don’t put your chopsticks in the serving bowl. If driving, stop for pedestrians at crosswalks. And just because you have kids doesn’t mean you can cut ahead in line.

The advice is part of an online manners guide the embassy posted on its Facebook page in response to criticism on social media about the behavior of Thai tourists in Japan. Most of the criticism came from Thai residents in Japan who reported sightings of “inappropriate” behavior on a popular Thai web forum, which inspired the embassy’s consular chief to pen the list of "10 do’s and don’ts."

“Japanese society is very unique. It is a society with strict rules that are not always obvious to visitors,” said Jessada Nanthachaiporn, the embassy’s first secretary. He said he intended the list as an educational tool, not as criticism of either culture.

Written in Thai, the code of conduct begins with escalator etiquette: Stand on the left, or walk on the right — except in the Kansai region, where the opposite applies.

There is separate elevator advice: The first person in holds the open button for others and should be the last person to leave.

In many ways, Thai and Japanese societies are similar, with sophisticated rules of etiquette and many shared cultural affinities, Jessada said. From a young age, Thais are taught the concept of “marayat” — or “good manners” — and values like humility and respect for elders, which are similar in Japan. But the same rules do not always apply.

His list offers advice on mobile phone use in buses and trains (“turn the ringer to silent”) and shopping: “Do not interrupt salespeople who are helping other customers.”

In Thailand, drivers often ignore crosswalks and zoom past pedestrians trying to cross. But in Japan, “Drivers must stop at zebra crossings and wait for people to cross the road, without honking the horn.”

Thais tend to eat family-style, sharing dishes, often without serving spoons. In Japan: “Do not use your chopsticks to pick up food for other people.”

Rather than take offense, Thais have applauded the list. The Facebook post has been shared and liked more than 1,300 times since it was posted last week. Commentators on Thai blogs have expressed admiration for Japanese customs, suggesting that if Thais adopted similar manners at home, the country would be seen as more developed. — Japan Times, 2014

Etiquette Enthusiast, Maura J. Graber, is the Site Editor for the Etiquipedia© Etiquette Encyclopedia
Posted by Etiquipedia at 1:01 AM