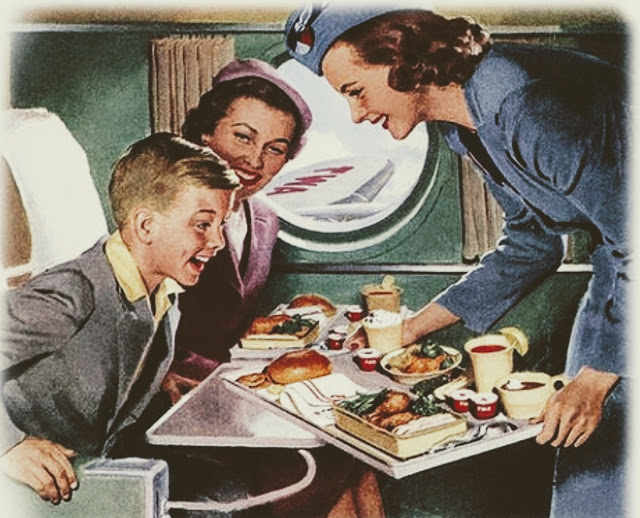 Food service on airplane flights used to be expected and plentiful, but those days are long gone for regular airline travelers. Nowadays, if you don't bring your own, you're likely to go without, unless you are in first-class. — "Some people will tell you to bring a cup of noodles or other instant soup aboard a flight and ask the flight attendant for boiling water during meal service. Although a mug of hot soup may sound enticing, it’s a bad idea to keep a cup of scalding liquid near your lap when turbulence could strike at any second. Plus, many prepackaged ramen cups have close to half of your daily recommendation of sodium, which certainly won’t help you fight jet bloat." —from SmarterTravel.com

An airplane manufacturer has just announced that all passenger machines will be equipped with regular dining rooms, so— That leaves it up to some etiquette expert to suggest something salty, but polite, for the passenger to say when the ship goes into a tail-spin during dinner and spills the soup in his lap. — Coronado Eagle and Journal, 1932

Etiquette Enthusiast, Maura J. Graber, is the Site Editor for the Etiquipedia© Etiquette Encyclopedia
Posted by Etiquipedia at 9:56 PM